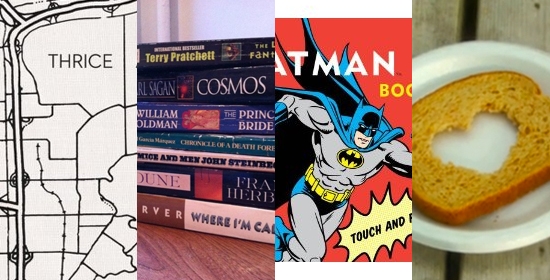 Thrice is one of those bands that I discovered late into my adolescence. I can’t recall which song it was that drove me to purchase one of their albums, but I definitely remember accidentally purchasing their older album, The Illusion of Safety, rather than the one I wanted, The Artist in the Ambulance. What a fortuitous mistake.

The Illusion of Safety saw play in my Sony Walkman until the thing finally died, broken in half by an unfortunate tumble. It was just hard enough to pique my interest, but included lyrics fine enough to soothe the budding writer just beginning to take shape within me. To this day, it ranks highly whenever someone asks me to compile a list of my favorite albums.

Unfortunately, Thrice is on hiatus. Their farewell tour is over and done. The one silver lining? They recorded a new live album during it, and I just this week managed to get my grubby mitts on it. Thrice’s Anthology — which is the name of the album — is composed of songs voted for by the band’s fans. In short: It’s lovely.

The new, and potentially last, album from the band that I grew to love so many years ago feels like a wonderful way to say so long.

If you’ve read our picks lately, you’ll know that I’ve been going through — and recommending — a lot of new books lately. This week, though, I’ve been getting back to basics and making some time for old friends. I’m pulling books I’ve read over and over and loved for years from their places on the shelf and bringing them back into rotation in my life, and it’s been great.
I’m not going through full rereads of anything, mind you — just flipping to a page and taking it from there. Without fail, it’s like having drinks with an old friend you haven’t seen in too long, a moment of awkwardness easily overcome before you’re reminiscing about the time you stole a Ronald McDonald statue from the drive through.

Just in the past few days, I’ve relived the misanthropic adventures of Ignatius J. Reilly in Confederacy of Dunces and had cause to recall those thankfully few moments in my life that have called for a recitation of the Bene Gesserit credo beneath my breath. I’ve revisited books that change mightily when you know the ending in advance, cringing through whole chapters of Ender’s Game and putting away as many pages of Of Mice and Men as I can before that “There’s something in my eye” feeling sets in. I’ve gotten back in touch with my Washington roots through the stories of Raymond Carver and Richard Brautigan, whose stories still always feel like home no matter where they take place, and wandered other planets with Ray Bradbury and a dog-eared copy of The Illustrated Man that is probably one of the first books I ever got to call my own.

So my advice for what’s shaping up to be a rainy fall weekend out here? Remember that your bookcase isn’t just a closet for books or a place to put finished works on display like trophies. It’s a place where your old friends live, and you should see your old friends more often.

Last weekend was the baby shower for my wife and our fast-approaching daughter, tentatively named Stormageddon until she’s born. Since I’m a nerd, and my wife is a librarian, guests were encouraged to bring a book for Stormageddon to help us force nerddom upon her.

My daughter now has more books than most of my adult friends.

Of course we were expecting the classics, Dr. Seuss, The Poky Little Puppy, et al., but I was surprised by a lot of the newer books we received. In particular I was impressed with My First Batman Book. It’s a touch and feel board book that introduces children to Batman with things like a glow-in-the-dark  bat symbol and a Batman cutout that ziplines.

I believe in Batman. It’s not that I believe there’s a guy who dresses as a bat to wage a war on crime that never ends, but I believe the world would be a better place if there were. It’s important to me that my daughter knows who Batman is, and hopefully she’s as inspired by him as I am. I’m glad she has a Batman book that’s shiny enough to get her attention, and durable enough to withstand heavy use and baby slobber.

Steven’s pick: Play With Your Food

Most people spend their weekends sleeping in, watching some bad television, or having video game marathons that last well into Sunday night. Me? Yes, I’ll admit I am indeed guilty of getting up past 9 am, but I spend the rest of the day working diligently on the numerous comic book, novel, and movie ideas I have roiling around in my cranium — it’s kind of like having a full work day. My sister and I are always looking to get our proverbial foot in the door when it comes to writing professionally, and a few months back we took the first steps toward that ambition.

It was your typical day in March, spending the afternoon scouring Craigslist for any writing gigs that were in our wheelhouse and, above all, legit. That was when we happened upon one post from a freelance videographer named Nick Mastromarco, interested in looking at screenplays he hoped to turn into a short film as a submission for the Tropfest New York film festival. The one thing this film needed, as stipulated by the Tropfest guidelines, was the appearance of what they call a signature item. For 2012, that object was a bagel of all things. Not letting an opportunity pass us by, we drafted a script entitled Play With Your Food, revised it, and submitted it, hoping for the best.

A few weeks later we got a call. Nick couldn’t get enough of our script! We had a creative meeting just days later and planned to film the entire production up in Yonkers. We assumed this would take us at most two days to shoot, but despite inclement weather, uncooperative ducks, and other minor mishaps, we managed to film it all within one day. While it wasn’t chosen to be presented at Tropfest, my sister, Nick, and myself couldn’t be happier with the final product. The actors and everyone else that contributed to the film’s creation were a blast to work with, and we’re happy that we at least have the chance to share it with everybody out there. That’s why it’s my pick this week.