Editors' Picks 12/21: All Your Easy Pieces Are the Yardcade | The Mary Sue

Editors’ Picks 12/21: All Your Easy Pieces Are the Yardcade 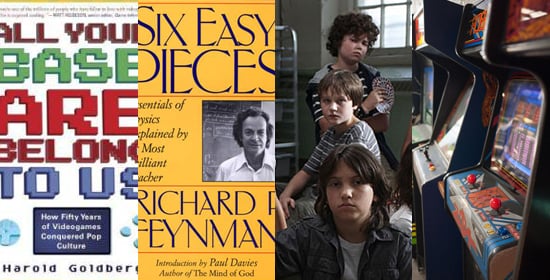 Rollin’s pick: All Your Base Are Belong to Us

Of all the books I brought with me when I left Indiana, Harold Goldberg’s All Your Base Are Belong to Us was the one I looked forward to finishing the most. I’d only heard good things about Goldberg’s exploration of the history of video games, and I was excited to brush up on the odds and ends that I’d never heard about before. I’d originally imagined that the book would serve as a nice supplement to my already extensive knowledge on the subject.

I was wrong, but in a good way. Goldberg deftly weaves the narrative of Nolan Bushnell’s history at Atari with the struggles Ralph Baer had in getting his own video game system out the door. He moves through the genesis of Electronic Arts, EverQuest, World of Warcraft, Naughty Dog, and so many more important milestones in the history of video games. To say the book’s a treat is to put it mildly.

It does become slightly dry at times, but this also serves as somewhat of a historical document. The meaty interviews and accounts from folks like the PopCap developers more than make up for any uneven spots. Overall, anyone even remotely interested in the industry should probably consider All Your Base Are Belong to Us required reading.

Earlier this week, I bought a copy of Richard Feynman’s Six Easy Pieces. Rather, I bought another copy of Six Easy Pieces, as it is far from my first. Containing six of the most elegant and accessible essays on physics from Feynman’s classic Lectures on Physics, Six Easy Pieces is arguably the most important book I’ve ever read. It’s an unassuming little thing, a slim volume bearing a photo of the Nobel Laureate and physics guru on the cover. It is also the finest primer on the inner workings of our universe ever penned, a love letter to learning and teaching that offers unmatched insight into how our world works and why it works that way.

With the possible exceptions of Carl Sagan’s Cosmos –- which is actually better as a TV show -– and Albert Einstein’s surprisingly readable Theory of General Relativity, it is the best single book on science any layperson looking to enhance their understanding of the world of science could treat themselves to. If the world did end today, I’d know what book I’d in my hands on the way out.

Another virtue of Six Easy Pieces is that there are something like 10 zillion copies in print, meaning you can generally get a copy for no more than a few bucks without looking too hard. That’s a good thing for me, because I have lost more copies of this book than I can recall. The funny thing is, I’ve never even been that upset about it. I’ve stopped expecting friends to return copies they demand to borrow, an action often accompanied by terms like “life-changing.” I left one copy at a coffee shop, only to find it gone when I returned an hour later, and trust that it had found a good home. I once accepted a religious book from a street preacher in San Francisco on the condition that he take and read the dog-eared copy that I had in my backpack. It’s a bargain I choose to believe he honored because I feel like we understood one another that day.

This book and I have a history, is what I’m saying. I don’t know how many copies I’ve bought already, and I can’t tell you where they’ve ended up. I can’t tell you how many more I will buy, but I can safely bet that I will not hang onto a single copy for long. I’ll leave them in coffee shops and the houses of friends. Maybe someday I’ll buy a stack to hand out on street corners like an evangelist, just for symmetry’s sake. Whatever else happens, I’ll keep passing it along, sometimes to the most important people in my life, and sometimes to total strangers, because if a thing changes your life, you shouldn’t have to hold onto the artifact of it. You should take no end of pride and pleasure in offering it to others.

Recently I replaced my satellite provider with an Apple TV. It’s a trade off, but 90% of the television I watch is through Netflix and Hulu anyway, so I finally cut the cord. The biggest change is that when I find myself with some time to kill and just want to watch TV, I can’t really flip through the channels and see what’s on. I have to look around a little more. I started clicking on shows Hulu was recommending for me. That’s how I found The Yard.

The Yard is a Canadian show from 2011, and the easiest way to describe it is by saying it’s like the old Saturday morning cartoon Recess meets Oz, and not the Oz with the wizard. The one in the prison with all the drugs and murder.

The show is shot in the fake documentary style we’ve all gotten so used to since The Office, but I think The Yard actually does it better than anybody. To keep the focus on the kids, we don’t see any adults. You hear the documentarian ask questions of the kids, but he’s never in the shot. Teachers are shot from the neck down, if at all, and in wider shots their faces are blurred and their voices distorted. They aren’t characters in the show so much as they’re set pieces.

The story focuses on Nick, the leader of a group of kids that take it upon themselves to make sure everything on the playground goes smoothly. There are no drugs in The Yard, but there are peanut butter and jelly sandwiches, which have to be smuggled in and sold at a premium because they’ve been banned from the school due to allergies.

In the episode “The Catcher,” Nick’s crew has to take over the peanut butter sandwich trade from a rival gang because he feels kids are being exploited. Nick even provides EpiPens for the kids who are allergic to peanuts. The episode is worth it even if you only watch the first five minutes and hear the kids in Nick’s crew talk about how everything is just a little better after a peanut butter and jelly sandwich. Colors are brighter. Smells are better. It just really relaxes you. Get it?

That’s the kind of thing The Yard does best. They deal with everything from drugs (peanut butter), to the economy (trading cards), and even territorial disputes in Northern Africa (the soccer field). We’re too often reminded that elementary schools aren’t safe places, separate from the real life problems of the world. It’s nice to be able to see children dealing with kid problems in an adult way, rather than the other way around.

It would be diminishing to call The Yard adorable, but that’s a risk you run with a show about elementary school kids. It isn’t a show for kids. The language is a pretty clear indicator of that. It’s genuinely funny, and at times even sweet, but it isn’t adorable. Though it is a little bit perfect.

Assuming that you were born prior to 1995, all of us geeks have fond childhood memories of visiting at least one arcade in our lifetime. For me, it was a delightful little gaming venue on the Atlantic City boardwalk called Ali Baba’s Arcade, situated in the all-encompassing shadow of the Trump Taj Mahal. If you were lucky, sometimes the Donald himself would show up dressed as the establishment’s namesake and hand out free quarters. Okay, that never happened, but I assure you that the arcade was very real. Anyway, it saddens me that in these modern times of Internet and console gaming, we no longer have a proper, honest-to-goodness video arcade to waste our spare change on and relive the golden days of our youth. That was until a year or so ago, when I discovered Barcade Brooklyn in Williamsburg.

The portmanteau succinctly describes what the place is all about: A bar that serves drinks at a decent price and offers up a cavalcade of arcade games from the late ‘70s into the ‘80s. Barcade’s got your standard fare like Donkey Kong, Pac-Man, and Galaga, but then they throw a few unexpected curveballs like Tapper — yes, the original Tapper in all its retro glory! Granted, some of the machines are riddled with scratchitti, making it obvious that they were plucked from defunct arcades or pizza parlors. Are they eyesores? A bit, but I have to admit that I like to think of them as little vandalized windows into the past, such as one in particular of a heart with the initials of two lovers dating back to 1989. Aw, ain’t that the sweetest thing? Okay, cue Simple Minds’ “Don’t You (Forget About Me)”!

What more can I say? For some good drinks, better games, and a chance to take in the nostalgia, no place is better than Barcade Brooklyn!