Editors’ Picks 12/14: The Hybrid Toy Chronicles of Our Readers 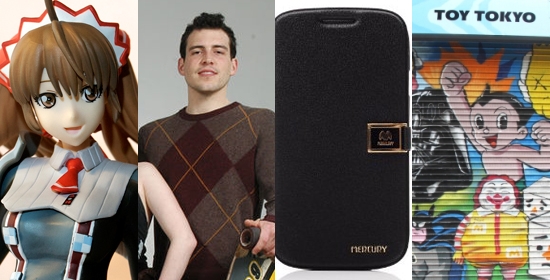 This week in Editors’ Picks: Rollin goes back to the video game basics, Ian finds a soft spot in his heart, Glen’s impressed by his wallet, and Steven’s happy to have found a wonderful place to shop.
Rollin’s pick: Valkyria Chronicles

Anyone that’s known me for any length of time is well aware of the fact that I enjoy somewhat offbeat video games. That isn’t to say I immediately embrace titles like Katamari Damacy, but I’m certainly not opposed to it. There’s something about Japanese games that just get me going, and I’m almost always happy to drop some cash on the latest titles localized by Atlus.

Valkyria Chronicles might not be from Atlus, but it certainly feels like it should have been. The game is a strange amalgamation of the strategy and shooter genres with a strong infusion of anime. If that sounds ridiculous, that’s because it is, and yet the game totally takes all of this in and spits out a glorious product.

I’ll avoid spoiling anything, but this pretty much sums up the game: Turn-based sniping with tanks. If that doesn’t convince you to give it a shot, nothing will.

At the risk of getting a little sappy, you all are great, and you help me realize every day what an awesome job I have. You send us great tips on cool stories, and you let us know when we’re off-base or missing a comma in record time. If I need a book recommendation for a long trip, you all are there in a flash. When we ask what Star Trek characters are great, and which ones you want to see lost in a tragic transporter accident, you’re full of opinions. (You also love Data, as is right and proper.)

This week, one of you even looked up and sent me the full motion filed by Carlos Romero’s lawyers in Florida’s donkey sex scandal, so now I know the exact legal definition of sex with an animal according to the state of Florida. It is the sweetest email about bestiality I have ever received as well as a terrible thing that I can never unsee, and I couldn’t be prouder or happier to have people pass stuff like that along.

I’m going on the road for a couple of weeks for the holidays but it shouldn’t affect my posting much, which is great, because even on (as close as I’ll get anytime soon to) vacation, I feel really lucky and honored to be a part of this site, and I feel especially lucky when I get to interact with you all on our Facebook page, over Twitter, and in our comments section — where I need to get better, I know — about what you like and what you don’t. Y’all are the best, and we hope you’ll stick around with us for what promises to be a really exciting new year for the site — and feel free to bring your friends.

Call me a wild man, but I don’t like keeping my phone in a case. I know accidents happen, but I’m a very adept juggler, and I’m confident in my ability to not drop things. I also appreciate design. Cell phones can be beautiful, but their third party cases tend to be bulky, gaudy messes.

I also don’t like carrying a wallet. I kind of remember being excited when I got my first one around the age of twelve, or whenever that was, but that excitement quickly waned. It became a chore to carry this stupid thing with me everywhere I went. I never settled on which pocket it should go in, and I always felt like I didn’t need most of what one keeps in a wallet anyway.

In college, I started wearing suits almost every day, partially because I looked hella good, but also because the added pockets made me feel more organized. Still, though, a wallet never felt like it fit comfortably anywhere. It was shortly after college when I stopped carrying one altogether.

I winnowed down the contents of my wallet to just my driver’s license and my debit card– the only two things I, or anyone, really needs– and threw them into the small pocket in the back of a Moleskine notebook. Wallets I never got a hang of, but I’ve carried a notebook with me everywhere I went since elementary school. It’s a good habit to get into. Also, using the notebook to replace my wallet was also a great way to justify spending $12 for a notebook.

Sometimes though, two things you dislike go great together. That’s how it is with wallet cell phone cases. I’ve had one for about a week, and it’s great. The case has two card slots for my license and debit card. I can wedge my Metro Card in there as well. It opens like a notebook and has a little magnetic clasp. Sure, it covers up the delightfully appealing design of my Galaxy S III, but the case itself actually looks nice, and the convenience is worth the trade-off.

You can easily leave the house in the morning forgetting either your cell phone or your wallet, but I don’t think a lot of people leave both behind, and when you combine them I think it’s less likely that you’ll leave your device/wallet behind.

Of course, if mobile payments become even more mainstream, maybe I can just leave my debit card behind altogether. It’s probably not too far-fetched to imagine a future where our cell phones can serve as forms of ID, so maybe then I can ditch my license as well.

Get on that, science. I really hate carrying stuff around. Except a notebook and my phone.

Manhattan plays host to a number of fine establishments where nerds can get their regular collectible fix and blow a week’s paycheck in under an hour. Stores like Midtown Comics and Forbidden Planet — while all very well and good — tend to get most of the spotlight when it comes to nerdy shopping meccas, but if you really want to shop somewhere a bit more alternative, look no further than Toy Tokyo on 2nd Avenue in the East Village.

As the name implies, Toy Tokyo is a store that specializes in imported collectibles from Japan. From PVC Godzilla figures to a blind assortment of toys to authentic Japanese Gashapon vending machines hungry for your spare change, this place is a whirlwind of Japanese pop culture that can leave one overwhelmed if it’s their first visit. But Toy Tokyo’s assortment of goods isn’t limited to stuff from Japan. Looking for some Transformers? They got you covered. Star Wars figures more your speed? Yep, got those too. Basically, yes, they really do have everything.

And the best part about Toy Tokyo is that you never forget your first visit. Before they moved, the store was actually in an apartment and you had to go up a dark, seedy staircase to get there. In spite of the trepidation that I’d be held up by a jittery homeless guy wearing a Mazinger Z mask to hide his identity, all apprehension was laid to rest when I walked through the door and took in the majesty of Toy Tokyo. So the next time you’re in New York, swing by and take a look. Just two things to remember before you go: Bring plenty of money and don’t second-guess your purchase. From experience, it won’t be there the next day.