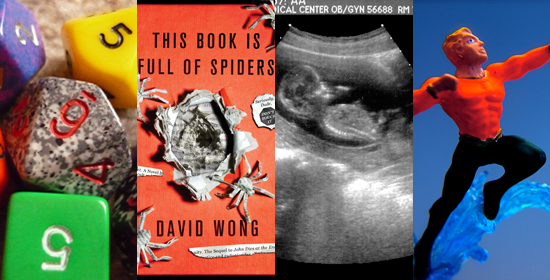 This week in Editors’ Picks: Rollin enjoys a new way to experience an old passion, Ian praises a surprisingly good sequel, Glen muses on life, and Steven roots for Aquaman.

One of the things I had to leave behind when coming to New York City was my childhood Dungeons & Dragons group. These were the folks that I’d essentially grown up around that just so happened to share my particular geeky interests. We’d been playing together for almost a decade when the first major member up and moved away: Me.

My books that I’d accumulated over the years came with me, but they’ve seen little to no use. With all the transition my life’s been going through since arriving this past September, there’s just not been time to devote to perusing the pages of my well-worn Monster Manual. Seeing as I had typically played the part of DM, that meant our group was suddenly leaderless, and therefore not much of a group. It’s been a depressing couple of months.

Enter Roll20, which bills itself as an “easy-to-use virtual tabletop.” We’d known about Roll20 since before I left, but only just now got serious about giving it a shot. We’ve managed to convince a man from Australia to DM for us, and we had our first test last night. What. A. Blast. I’d forgotten just how much I enjoyed tricking out a build to the point of being just plain silly.

The platform worked as intended, with tokens being controlled on a virtual surface, and the group caught on fast. The service’s voice and video chat was spotty, so we dropped it in favor of Skype, but that’s literally the only negative thing I can say about the experience. It’s Dungeons & Dragons with the people I’ve always loved playing Dungeons & Dragons with. That makes me happy.

Ian’s pick: This Book Is Full of Spiders

With fall in the air, I’ve been spending a lot of weekends just kicking back on the couch with a good book and probably too many cups of coffee, and I’m going to level with y’all — I heartily endorse this event or product. It’s pretty much the best, especially when you have a new book to be excited about, which I totally do.

I’ve expressed my not insignificant enthusiasm for David Wong’s excellent novel John Dies At The End here before, which includes but is not limited to growing excitement over the adaptation, helmed by Phantasm director Don Coscarelli. It wasn’t until this week that I started dipping into Wong’s sequel, This Book Is Full of Spiders, which was released last month.

You guys, I seriously don’t know what I was doing with that month of my life. What a fool I’ve been.

I don’t want to say a whole lot about This Book Is Full of Spiders, as just a few pages into it, I feel a bit underqualified at the moment. Here are a few things I can say at first blush:

I would write more, but every moment I’m writing about this book is one that I’m thinking about it and not doing it, and that’s less than awesome. So yes, go, read and enjoy.

My wife is pregnant with our first child, and I’m really stoked about it. When we first started telling people about the baby, the big question we got was whether or not we would find out the gender. Of course we did. It’s a girl. We found out as soon as possible, and if it were up to me we would have found out sooner.

I don’t like waiting for anything. The fact that I have to wait for the baby to be born is driving me crazy. I want to know everything about her, but so far I’ve only been able to determine her gender and whether she looks more or less like a baby. She does!

I’m working from home today because I’m going with my wife to her sonogram appointment. I missed the last one, and I didn’t like that. My wife brought home pictures for me. The pictures are nice but there’s a lot to be said about seeing a little grey splotch on a screen move when you know that splotch is your baby.

Besides the sneak peeks at our little girl, sonograms provide useful data in a wide range of medical situations. They’re used to screen for prenatal health problems. I had one to check for kidney stones a few years ago. A friend of mine had a series of sonograms on his jibbly bits to diagnose a testicular tumor.

So this week I’m going with sonograms as my pick. They’re great, even though every time I look at a sonogram of my daughter, I can’t help but think of the the raptor skeleton from the beginning of Jurassic Park.

Get a sonogram. Then go watch Jurassic Park. That’s my pick.

Just in case you couldn’t tell by the posts from me the past few days, I am indeed the new guy ‘round these here parts. Being the comic book aficionado that I am, I thought I’d devote my premiere editor’s pick entry to the upcoming Throne of Atlantis crossover event happening within the pages of Justice League and Aquaman.

Prior to DC Comics’ New 52 reboot, Aquaman has always been a source of smug derision from both geeks and regular folks alike thanks to a number of floundering comics, his cornball portrayal in the 1968 cartoon series, and, well, this:

Enter DC’s resident scribe par excellence Geoff Johns. Like some kind of alchemist that also writes comic books, he can turn any character — no matter how obscure or awful — into pure, money-making gold. Helming both the now highly lauded Aquaman and equally entertaining Justice League series, Johns has been building quite a story within each of these titles, which results in “Throne of Atlantis,” where Aquaman leads his oceanic kingdom in an all out assault on us inferior land dwellers. Essentially Earth has to suffer because of the identity crisis centered around Aquaman’s inability to come to terms with his being a human/Atlantean mutt.

Who has to clean up the mess? The Justice League, naturally, granted they can get their priorities straight and overcome the bane to nearly every hero and heroine’s existence: Bad PR. Longtime comrades at war? TMZ painting a damning picture of the heroes? Yes, this happened. What’s not to be excited about? I implore you, buy the first volumes of the Aquaman and Justice League graphic novels, get caught up with the story, and start picking up the single issues to be a part of what might be one of the most highly anticipated comic book events of 2012!