Editors' Picks 11/16: Eating Fresh Birds of Prey in the Target | The Mary Sue

Editors’ Picks 11/16: Eating Fresh Birds of Prey in the Target 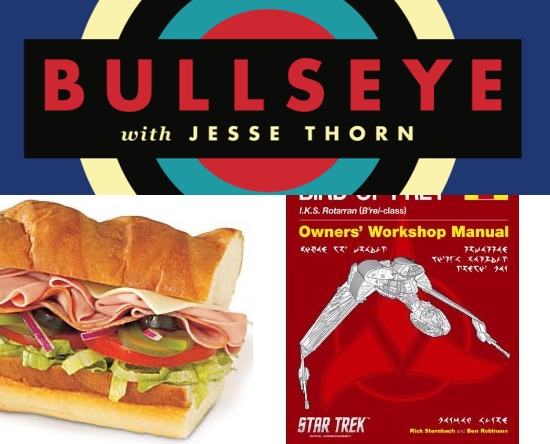 This week in Editors’ Picks: Rollin forms a habit, Ian falls for a book, and a podcast wins Glen’s heart.
Rollin’s pick: Subway

For whatever reason, I form habits that I find it hard to break. I tend to wander into certain restaurants at specific times on a regular basis. It’d be like clockwork if I weren’t so forgetful. Point is, I’m a creature of habit. My latest habit seems to include hitting up the local Subway for lunch each and every single day.

It’s gotten to the point where Ian and Glen make jokes about it. Whenever I tell them I’m going to lunch, they respond, “eat fresh!” They know. They always know. I’ve decided to accept this fact, though, and celebrate my love of Subway sandwiches. There’s nothing better than an Italian B.M.T. with provolone on a cold day. Well, a nice coat, maybe, but that’s not the point.

Point is, I’m taking a stand for people that don’t like change everywhere. Monday, I’ll probably eat Subway, because it’s there, and I know I like it.

We get a lot of books sent to us here at Geekosystem, and most of them… well, they’re not exactly up our alley. That’s all I’m saying. Sometimes, though, those book publicists really nail it. Such is the case when they send us something like the Star Trek: Klingon Bird-of-Prey Haynes Manual, which has been taking up way too much of our time this week. If you don’t think a slim, hardbound treatise on the metallurgy of ship’s hulls and the physics behind a warp core sounds like fun bedtime reading, think again.

First off, this is a beautiful book, stuffed with highly detailed, finely rendered images of the go-to ship of the Klingon space fleet. The cues it takes will be familiar to anyone who has ever worked on a car or truck from a classic Haynes manual, but let’s face it: Images and detailed explanations of the inner workings of a warp core are way more exciting than an exploded visualization of a spark plug.

In addition to the great illustrations and robust tech specs, the guide is a solid primer on Klingon culture, history, battle tactics, and even biology — we had totally forgotten that Klingons have a redundant biological makeup that gives them eight-chambered hearts and a pair of livers — that will be a welcome addition to any Trekker’s library. There is plenty of fun to be had learning about the inner workings of Klingon disruptor cannons and photon torpedoes, but it’s also nice to get a brush-up on the history of the Dominion War in the bargain.

In case anyone was wondering what our weekend looked like: DS9 marathon. Please send someone to turn us so we can avoid bedsores, thanks.

I listen to a lot of podcasts, and now that I commute for this job I’m listening to even more of them. A lot of them are great. Some are funny, and some are educational. The best are both, but the one that I look forward to listening to every week, the one I get really excited for, is Bullseye. It’s the best thing about Tuesdays.

Bullseye is hosted by Jesse Thorn, and he describes it as a show that is about what’s good in popular culture. Each episode features recommendations from culture critics in a variety of categories like televisions, comic books, and music. These are from people like Mark Frauenfelder from BoingBoing, or Kumail Nanjiani from The Indoor Kids podcast. Jesse interviews guests on the show too, but what separates Bullseye from other interview shows is that the subject of the interview isn’t just whichever celebrity with something to promote that the show can book. The guests on Bullseye are there because they’re interesting. It’s the way interviews used to work, and it’s great.

The whole show is permeated with a level of sincerity that’s lacking in a lot of our culture. It isn’t about trying to promote what’s already popular. It’s about bringing people to the best stuff. The absolute best segment of the show is the very end. It’s called “The Outshot” and it’s a recommendation from Thorn himself for something he wants people to be aware of, and there’s a wide range. One week it could be a hip hop mixtape, and another week it could be Cheers.

Here he is talking about the song “People Get Ready” by Curtis Mayfield:

It seems like these recommendations are all over the map, but the one thing every Outshot has in common is it’s something Thorn feels passionately about, and you can tell. You hear it in his voice.

Check out Bullseye with Jesse Thorn.