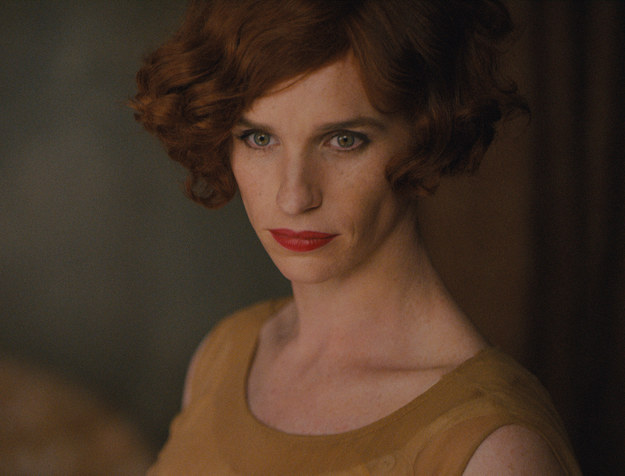 The first image of Oscar winner, space tycoon, and talking train Eddie Redmayne in his role as painter and transgender pioneer Lili Elbe in the upcoming film The Danish Girl has been released.

Due out in 2016 and helmed by Les Miserables and King’s Speech director Tom Hooper, The Danish Girl is inspired by the true story of Danish artist Lili Elbe, one of the first identifiable recipients of sex reassignment surgery, and her wife Gerda Waud. In our interview with Redmayne earlier this year, he described The Danish Girl as an

extraordinary story, a true story […] about a couple in the 1920s, and it’s about identity and, similar to The Theory of Everything I suppose, it examines the fact that we have one life on this planet, and how complicated and difficult that is and how brave of a choice that is in that period when no one had transitioned into a woman. And so the risk of death, which was a gigantic risk in order to be true to one’s self.

Redmayne said he had been preparing by “meeting transgender women from the community and just trying to educate [him]self”; speaking to The Daily Mail, the actor added that he has been ‘’observing the minutiae of feminine physicality” and working with the same choreographer that helped him prepare to play Stephen Hawking in The Theory of Everything.

Considering the film’s subject matter and Hollywood’s history of recognizing cis actors for playing trans characters, it’s fair to speculate that The Danish Girl may be a heavy-hitter in next year’s Awards Season. Unfortunately, it’s also part of a growing film industry trend of rewarding cis people for portraying the trans experience rather than creating roles for and boosting the profile of talented trans actors (another contender for Redmayne’s role was Nicole Kidman).

Elbe’s story is incredibly important, but films about transgender individuals don’t have to be made at the expense of trans performers (additionally, it would also be great to see more trans actors in projects that aren’t necessarily specific to their gender identity. As we’ve said before, Laverne Cox for Spidey, please).

[UPDATE]TIME points out that Redmayne addressed the controversy surrounding his casting in a Telegraph interview:

“There is an incredibly valid discussion for why a trans actress isn’t playing the part, because there are so many brilliant trans actresses, and I’m sure there are many who could play this part sensationally.” The issue of hormone therapy was a problem, he said, because it wasn’t available in the early 20th century when Elbe transitioned.

What do you think of The Danish Girl and its casting?