Review: Jupiter Ascending Is The Worst Movie Ever Go See It Immediately

It's so stupid it's beautiful. 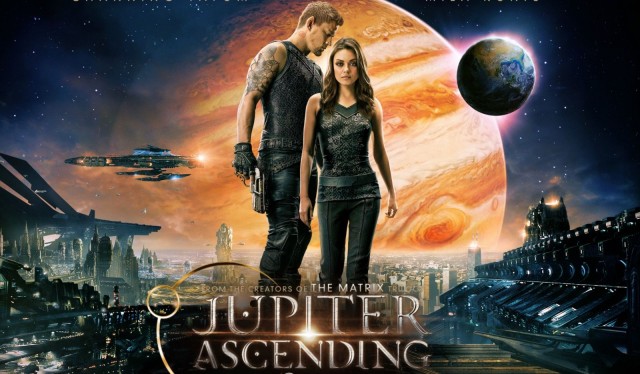 So what exactly is Jupiter Ascending?

The plot is this: the Wachowskis were given an extraordinary amount of money to make whatever the hell they wanted, and what they wanted to make is exactly what we all, secretly, deep down, want to make: the big-screen adaptation of that Stargate fanfic you wrote when you were fourteen that really went off the rails and began to inhabit its own universe, complete with original characters, wolf-men, and bees. That’s Jupiter Ascending.

I mean, I want to have a serious discussion about the film’s plot, but I honestly can’t. I can’t because it just doesn’t matter. It doesn’t matter! What about the plot could possibly matter when part of it involves Mila Kunis as the reincarnation of an ancient space princess who falls in love with a Channing Tatum-shaped half-wolf hybrid angel alien with anti-gravity roller skates and a great debt to pay off? That’s Jupiter Ascending.

Okay, I’m going to try. [MILD SPOILERS THAT DO NOT MATTER AT ALL RE: YOUR ENJOYMENT OF THIS FILM AHEAD]. Mrs. S from Orphan Black but with a Russian accent falls in love with Agent Carter‘s Jarvis, but then he dies in a scene that tried really hard to be as emotional as the opening to Guardians of the Galaxy, but was mostly – like the rest of the movie – just preposterous, but so preposterous it was really kind of amazing. There are montages where Mila Kunis scrubs toilets. She discovers she is a space princess who owns the Earth when space-wolf Tatum saves her from Roswell aliens who attack her while she’s having her eggs harvested. Her space princessery is further confirmed by bees, who, as it turns out, can smell princesses (???????????). Eddie Redmayne is her space-family and he wants the Earth. You may have inferred from the trailers that Eddie Redmayne is this film’s antagonist.

Eddie Redmayne is literally flawless in this film. Eddie Redmayne knows Jupiter Ascending is bad. Eddie Redmayne knows this perhaps better than anyone else in our solar system, and he does what needs to be done. He swooshes around without a shirt but with a black cape for two hours, speaking only in whispers except for the very occasional ridiculous outburst. He is so over-the-top I am not sure where the top even is anymore. He should win an Oscar.

But if you’re not into shirtless Eddie Redmayne or dance-fighting Channing Tatum (who is wearing a blonde goatee potentially made out of Bradley Cooper’s hair from American Hustle???), that’s okay! Jupiter Ascending will serve you with unnecessary shots of Kunis’s underwear-clad employer and an almost all-female alien sex party. It also serves pure, pristine Gugu Mbatha-Raw, who can do so much better than this, but chooses not to – and for that, I respect her. I imagine Gugu and Eddie hanging out after the Golden Globes, laughing about how much they enjoyed filming this ridiculous movie and hoping for a sequel. 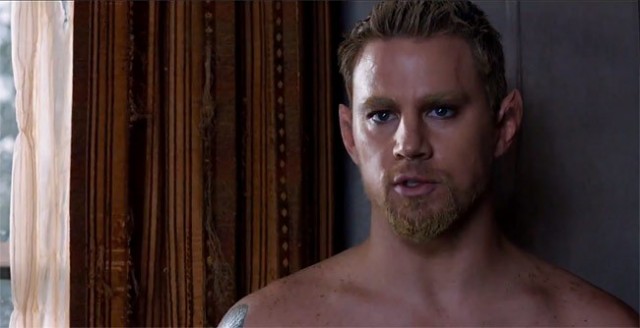 Despite all that, I would be lying to you if I said I didn’t enjoy myself every single second I was in the theater for Jupiter Ascending. Yes, I laughed my way through a significant portion of the film that I definitely was not meant to laugh my way through, but damn if that didn’t make it a good date night. The costumes are stunning, Kunis and Tatum are likeable, and how often do we get to see a full-out, ovaries-to-the-wall original space opera? I appreciate what the Wachowskis were trying to do here, and that alone had me sitting up in my seat (bees though??? Whatever.)

If I had to critique this movie in any sort of, you know, actual way (beyond “it was a hot-ass mess”), I would say that I do wish the film had been a little less caught up in the traditional model of princess-saving. When I hear “Mila Kunis black leather space princess,” I want to see her bulked the hell up, Emily Blunt style, kicking ass and taking names. We don’t get to see Kunis looking really cool until the very end of the film, at which point I wanted way more of that. Which, I guess, means I would pay for a sequel.

Jupiter Ascending is also one of the rare instances where the film would have benefitted from being longer. I rarely feel that way about movies, but this one needed some sort of tie-in comic or novel at the very least to make it work in a two-hour window. The jump from “I’m a cleaning lady!” to “I’m a space princess!” happens way too fast, and Kunis accepts her new life far too quickly. Equally shoehorned in is the burgeoning romance between Kunis and Tatum, who have absolutely zero chemistry with one another. Every time they have a romantic scene, I can actually see Tatum choreographing dances for Magic Mike 3: Just Cocks Everywhere This Time in his head.

I’ll also say that the film was, as has been mentioned in endless reviews, preposterously derivative. Everything reminded me of something else; the structure reminded me of Dune, the space-gates reminded me of Cowboy Bebop, that one ship was lifted directly from 2001, that rat dude was just Peter Pettigrew, and the cyberpunk mercenaries literally stepped out of Trinity’s Fashion School. But I couldn’t tell if they were all supposed to be intentional homages, or if it was just straight-up laziness on the part of the Wachowskis – and that’s not a good feeling.

The one design element in the film that I consistently found enthrallingly original (besides, like, “Hey, there’s a giant person refinery on Jupiter!”) were the spaceships. It’s unusual to see ships where all the pieces are separate, held together, I’m assuming, by some weird anti-grav field, and I could have gleefully watched them zoom around in space all day.

Anyways, Sean Bean is a hybrid sad space dad bee marine named Stinger who may (though it is left ambiguous) actually live to see the end of the film, so you’re going to want to devote $10 to this as soon as humanly possible. I swear to the ancient house of Abraxas it’ll be the best time you’ve had at the movies since you decided not to go see 50 Shades of Grey.

At the end of the day, the overwhelming feeling I had when leaving Jupiter Ascending was this: I really, really want a Mass Effect movie.