The Fist of Awesome soundtrack is just as awesome as the guy who created it. 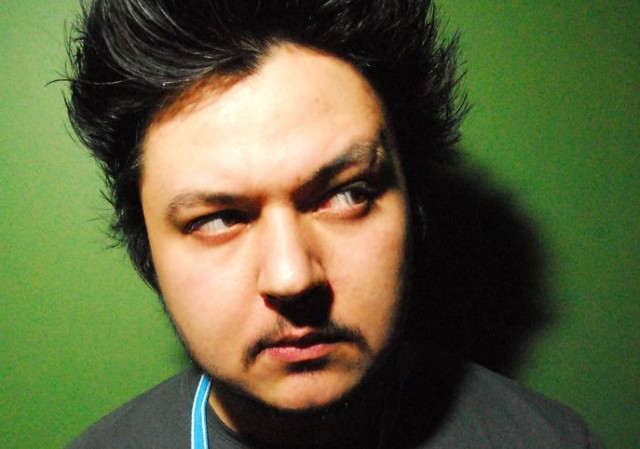 Last month, we were busy geeking out over the incredibly fun, charmingly 8-bit iOS and Android game, Fist of Awesome. A time traveling, bear punching adventure inspired by titles like Final Fight and Golden Axe, it’s a great game that had us hooked… especially with its catchy soundtrack.

After spotting our note that we’d love to see an official release of the Fist of Awesome soundtrack, Brendan Ratliff (aka Echolevel) reached out and introduced us to his sweet, sweet 8-bit beats.

Before we continue, Brendan was kind enough to open up the main theme from Gun Runner for you Geekosystem readers to download and listen to. It’s a tune he’s really proud of, that probably hasn’t been heard too often “as it’s instantly skipped past in the game by most players, ever the fate of main menu music.”

Read on to learn about the talented musician, and enjoy this exclusive free download! Maybe download it first and listen to it while reading the article. It’ll make it feel more like a video game.

Eric Smith: Tell us a bit about how you got into writing chiptune music.

Echolevel: I can even tell you about the first chiptune I ever heard! A 3kb tune by TDK (The Dark Knight) of the cracking group Crystal that was used in the cracktro for Street Fighter 2 on the Amiga.

The Amiga was my family’s first computer and my dad was a teacher, so whenever he caught students swapping floppy disks of cracked and copied games on the playground, he got them to make extra copies for him to take home to his children… which was fantastic! Sort of illegal, but fantastic for a 9 year-old. When I first fired up Street Fighter 2, which mostly worked except the graphics resources for Guile’s legs were weirdly corrupted, I heard this tune and it blew my tiny mind.

I also got a hold of the software required to make my own tunes – trackers like Protracker, and later Impulse Tracker, AHX and others… and it was all straightforward after that. It was many years before I got to a level of skill and confidence where I felt I could release my work into the wild, but becoming part of the Amiga and PC demoscene meant I could collaborate with coders and artists to produce the sorts of cool stuff I’d seen on those ‘cracktros’ back in the day.

Demoscene creations are all shared freely and it’s a great way to learn skills and engage in a bit of lighthearted rivalry and competition. When chipmusic had its big popular revival in the early 2000s, with labels like Micromusic and 8bitpeoples, it was just coincidence that after years of doing this music in my bedroom and not caring about whether there was an audience for it, suddenly there were people out in the real world getting excited about it – both in terms of pure nostalgia and creative advancement of the form and techniques across all sorts of musical genres.

So you’ve got a few other soundtracks under your belt! What can you tell us about Gun Runner and Pineapple Smash?

Yeah, my first game soundtracks were for Game Boy Advance homebrew titles, all of which seem to have disappeared from existence over time, but the GBA required very small files to save space and Amiga modules were perfect for that.

Much later I was approached by Rich Edwards who happens to live in my city and wanted some fairly chippy and retro music for his PC game Pineapple Smash Crew. Working on that was great fun because I’d decided to move on from my sort of sophomoric, fundamentalist dedication to doing only ‘authentic’ chipmusic on original platforms like the Amiga and open up my music to all the possibilities of fully-sequenced digital production, which I’d been doing in parallel in different styles for years.

So there’s guitar in there, some synth hardware, loads of modern production techniques that aren’t subject to the limitations of obsolete platforms, and I was able to mix and master it so it’s easier on the modern ear than squealing, harsh, chipmusic can often be.

Similar story with Gun Runner, and although Gun Runner was a smaller job, the brief was a bit more specific in that it needed to tick those boxes for an in-your-face, aggressive, Contra/Midnight Resistance-style gun and run shooter – but also with a heavy dose of over the top eighties melodrama.

Both games are great, all bias aside; you can get PSC on Steam and a few other PC marketplaces, and Gun Runner is a freemium iOS game available on App Store.

You’ve got two names for two different pursuits. Echolevel and Syphus. Tell our readers a bit about those names.

Syphus is my old demoscene nick that I’ve habitually used for scene releases and live performances at New York’s Blip Festival, the UK Chiptune Alliance Tour and various other events/places.

Echolevel is a name I use for miscellaneous electronic compositions, for non-game soundtrack work, for software dev and for anything else I get up to. It’s actually a bit unwieldy having multiple names kicking about, so I should probably consolidate a bit…

So this non-chiptune work. What can you tell us about it? Rumor has it you play a mean Irish fiddle.

Yeah, I’ve been playing Irish traditional music for about 25 years, since a fiddle was thrust into my podgy 5 year old hands and I was taught my first few tunes by my granddad in Belfast. I play a lot around Newcastle, where I live, and it’s another income stream for me – live gigs and occasional teaching. I’ve also soundtracked a few BBC Radio dramas, which is tremendous fun and involves using all my conventional musical training (classical, electronic, etc.) to work up textures that fit the script and the direction.

Getting one-off commissions to do people’s short films is also cool, and I’ve done a few of those as favors to friends or as paid work for industry. As a freelance musician, unless you’re a Hans Zimmer-like titan in your chosen field (which I’m demonstrably not!) you have to diversify and make sure you can adapt to lots of stuff in the interests of paying the bills and keeping a roof over your head. But if you get to pick jobs you enjoy, that’s a great bonus!

What games have you been playing lately?

Woefully few, what with all the work and a 2 year old child running around, but my recent favorites are Hotline Miami, FTL and Sword & Sworcery (not really new, but I’m always late to the party).

I know you didn’t ask, but one I’m really looking forward to is Rex Rocket, which has met its Kickstarter target and is being soundtracked by my friend Nigel… or @Saskrotch, in the chipmusic world. While you’re waiting for the game, be sure to check out his music on Bandcamp!

And what other chiptune artists do you listen to? Anyone you’d like us to check out?

Saskrotch, as mentioned, and all the usual big names in chipmusic over the last decade – Bitshifter, Nullsleep, Glomag, Sabrepulse, etc. I’m missing loads out, but if you head to 8bitpeoples.com you can’t go wrong.

As for my real favorites in the oldschool demoscene world, 4mat is a legend – and still producing amazing stuff today, Zabutom is a sickeningly talented Swedish composer and probably my all-time favorite is Radix.

And lastly, where can we find your stuff online?

Echolevel.co.uk is where most of my stuff lives, including a Syphus mini-site with a link to my archive of old mod files, but to hear my most recent stuff you can head to soundcloud.com/echolevel and syphus.bandcamp.com.

Thanks for having me!