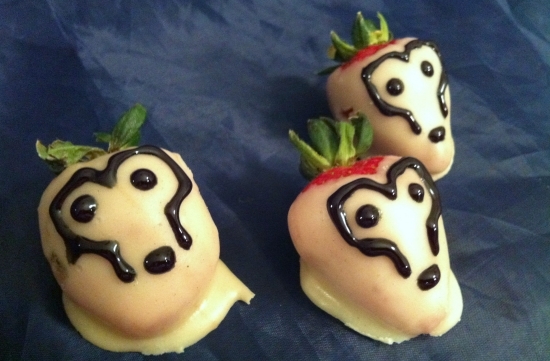 Going out to dinner for Valentine’s Day is fine, but if you really want to show your special lady or fella or ladyfella that your two hearts beat only for them tomorrow night, why not put a meal together from Dining With The Doctor: The Unauthorized Whovian Cookbook? We got our hands on a copy, and I sampled a few of the recipes with my wife. Yes — I made and ate fish fingers and custard.

Dining With The Doctor features one recipe for every episode of the first six series of the modern Doctor Who, which is surprising, because apart from the obligatory fish fingers and custard, I can’t think of a lot of food from the show. That didn’t stop author Chris-Rachael Oseland from creating a recipe for each episode, which clearly took a serious level of dedication.

A lot of the recipes are just ways of making food look like things from the show, like the white chocolate strawberry Cybermen pictured above. Thankfully, not all the recipes are food. There are quite a few cocktails in there as well.

There are a lot of recipes I want to try in this book, particularly some of the cocktails, but for a trial run I figured I would make a simple three-course meal and pick a salad, entrée, dessert, and of course — a cocktail. I threw on a fez, blasted some Chameleon Circuit, and made the Silurian Hot House Salad with Lemon-Lime Vinaigrette, Bow Tie Pasta with Protesting Star Whale Brains, Fish Fingers and Custard, and the Jackson Lake Cocktail. 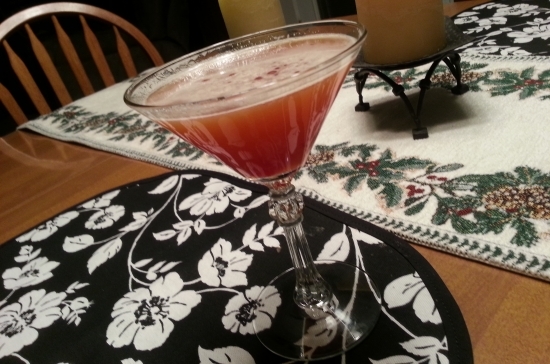 There are plenty of cocktail recipes in the book. I picked the Jackson Lake largely because I already had the ingredients — gin, tea, sugar, orange juice, maraschino cherries and juice thereof, and orange bitters — but also because I can’t imagine anything more British than a cocktail made from tea and gin.

The book says this can be served hot or chilled, and I opted for chilled. If you do so, make sure the tea cools down well enough before you put it in the shaker with the ice or the final product turns out incredibly watered down. You can also do what I did, and just add a lot more gin than the recipe calls for. My wife was pregnant at the time, so she didn’t try it, but didn’t seem interested in a tea and gin combo. I quite liked it.

Since the recipe is based on an episode centered around someone losing their memory, you could drink these until you don’t remember anything, but that’s not recommended. I just sipped it while cooking and doing periodic Winston Churchill impressions. 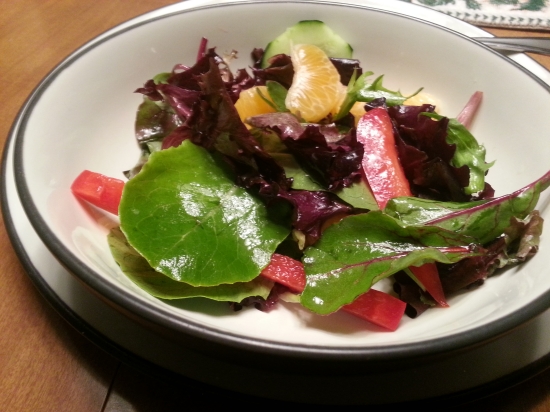 Hey, remember in “The Hungry Earth” when The Doctor, Amy, and Rory sit down with the Silurians for some salad? No, me neither, but Oseland says this salad is inspired by the “green Silurian scales and the red blood spilled in their unnecessary conflict.”

Sure, it’s a bit of a reach, but salads are pretty basic, and if they have to be inspired by something it may as well be Doctor Who. It features mixed salad greens, Clementine oranges, cucumber, red pepper, and a lemon-lime vinaigrette.

The salad itself is pretty standard, but the proportions for the dressing seemed off. It calls for one half cup of water along with the lemon and lime juice, vinegar, and olive oil. If I were to make it again, I would cut the amount of water at least in half. If you’re making this, and have any experience making salad dressing, you’re probably better off following your heart than the recipe. 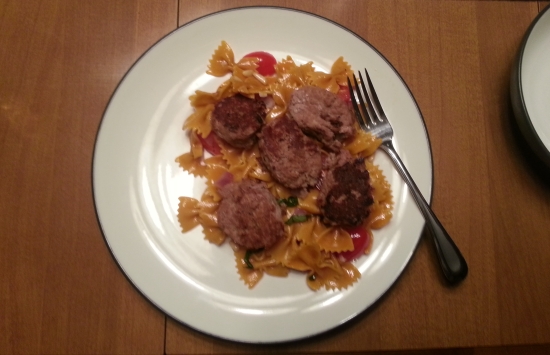 This pasta dish uses bow tie pasta now, because bow tie pasta is cool. The meatballs are meant to represent the brains of protesting star whales. That’s gross, and a little depressing, but still rather delicious. The recipe calls for prepared meatballs or your favorite sausage. I made some meatballs out of ground turkey. I tried to shape them into little brains, but as they cooked they lost their shape.

Oseland tried to use a red colored pasta, but says the color leaked out in the cooking process. I tried using red pasta made with carrots, but as you can see in the picture above, I had the same problem with the color draining out. The pasta is tossed with toasted pine nuts and cherry tomatoes with a garlic, basil, and olive oil sauce.

The sauce was a little bland, but adding some Parmesan cheese made it better, because adding cheese makes most things better. In the book Oseland encourages you to make your dinner guests choose to Protest or Forget this dish. I can’t figure out which ones means I would make it again, but I would. Protest, I guess?

If you decide to make this for a Valentine’s Day date, I hope your date doesn’t choose to forget you. Although having them decide to protest you can’t be great either. Best to not force a choice out of them on this one. 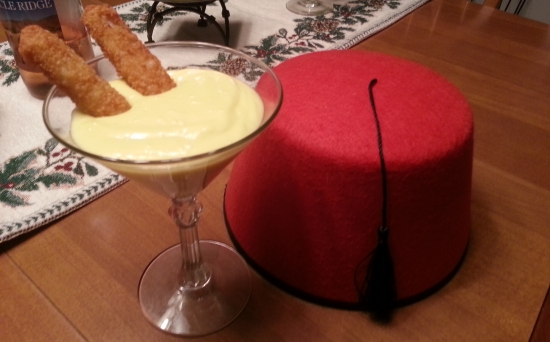 Everyone I told about this cookbook asked me the same question: “Does it have fish fingers and custard?” Yup. It sure does. It actually has several recipes for fish fingers and custard. That’s surprising because it’s not something a lot of people actually want to eat. Most of the recipes are for look-a-like dishes that replace the fish fingers with things like french toast and cake. That might be good enough for some people, but I feel like I’d be doing you folks a disservice if I didn’t go the full nine with this.

I went with actual fish sticks, and the recipe for authentic British custard sauce in the book. One thing I noticed right away is that the recipe doesn’t call for very much sugar, only a tablespoon, so it’s not as sweet as you might think. The book explains that custard in the U.K. is different than what we Americans think of as custard. Though if you don’t feel like making the custard from scratch — which isn’t difficult, but requires a lot of whisking — you can add extra milk to a box of instant vanilla pudding and wind up with something similar, though I’d imagine a lot sweeter.

If you’re wondering what they actually taste like together, I recorded a video of myself eating it for the first time. Allons-y:

Surprisingly not bad. I’ve actually even made fish fingers and custard again once since I recorded that because I still had some leftover frozen fish sticks. Oh, and I’ll save you the trouble of pointing it out in the comments — I know that in the fez I look more like Sallah from Raiders of the Lost Ark than I do The Doctor.

If you want to try these, or any of the many other recipes in the book for Valentine’s Day there’s still time. You can grab a Kindle edition on Amazon. They also have it in paperback if you’re into that sort of thing.

If you’re a decent cook, and you see anything in one of the recipes you think might be a little off, I recommend going with your instincts. The book takes a lot of great inspiration from Doctor Who, but I would change a few of the specifics of the recipes I tried if I were to make them again.