Disney Announces Their Own Streaming Network With Over 400 Titles 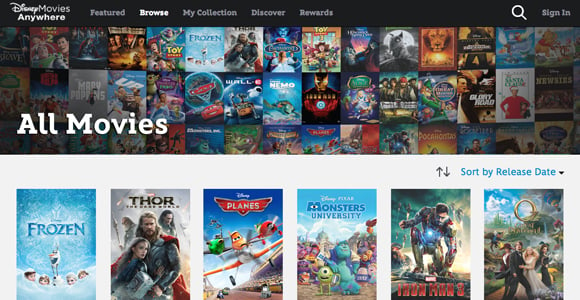 For a long time, there was a severe lack of Walt Disney Company titles on Netflix. Then slowly but surely, deals started being made and the classic animated films began popping up in my queue. I was very happy, as I’m sure others were. But today, Disney has announced their very own streaming service for a slew of titles launching with their latest hit, Frozen.

“In a new deal with Apple, Disney Movies Anywhere goes live today exclusively through iTunes, kicking off with more than 400 Disney, Pixar and Marvel titles such as Iron Man 3, Finding Nemo and Mary Poppins,” writes Deadline, “The service allows users to browse, buy, manage and watch movies on PCs and iOS devices using an app or website.”

You may remember Disney making a deal with Netflix not too long ago for new Marvel Entertainment content. They also recently announced a move to finally get Star Wars titles, including the entire Star Wars: The Clone Wars saga (and its final episodes), on the paid service.

Disney previously had a digital presence with their Disney Movies Online, which closed its doors at the end of 2012. Disney Movies Anywhere, as this new service is called, is the next step. Disney home releases have come with digital download codes for a few years now and those will be redeemable on DMA. To help promote Disney Movies Anywhere, they are offering a free digital copy of The Incredibles to folks who connect their iTunes accounts with DMA. They’re also offering double Disney Movie Rewards for the first week.

It’s certainly a snazzy new deal but doesn’t affect my personal watching habits as I rarely purchase a film digitally and they don’t seem to be offering rentals at this time. So I have no reason to stray from Netflix for Disney titles. What about you?

[EDIT] Folks have been telling me this is only available in the US at the moment, which is a shame. No word on when/if it will eventually spread out.