In Obvious Cry For Help, Discovery To Air Show About Man In “Snake-Proof Suit” Being “Eaten Alive” By An Anaconda

*snaps her jaw back in place* 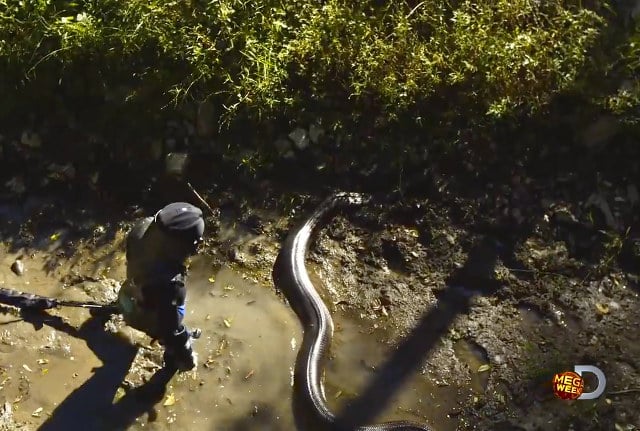 INTERNET! STOP WHAT YOU ARE DOING AND HELP ME PROCESS WHAT MY EYEBALLS ARE SEEING RIGHT NOW!

The following is a 100% real preview for an episode of the show Eaten Alive, set to air during Discovery’s December “Mega Week” event. There is a lot about that sentence which is personally amusing to me, but any beef you might have with Discovery and its attempt to increase ratings by giving things stupid, hamburger-y names is about to be eclipsed. Get a load of this:

As I said earlier, that is real and not, you know, a spoof of Discovery’s historically sensationalist programming. For context as to why a man in what looks like a unitard allegedly fed himself to some poor wild animal, Geekologie tells me that the snake’s tasty yum-yum dinner is 30-year-old wildlife expert Paul Rosolie (check him out on Twitter for a weird time), whose devouring and subsequent regurgitation will air December 7th. (I mention Rosolie’s age only because dude, you are not going to live to see 31 if you keep sticking yourself down snake gullets! Chilllllll.)

According to Geekologie, the tether you can see on Rosolie in that top image is “for getting the snake to regurgitate after he’s in its belly,” so essentially, Discovery sent a man spelunking in a snake’s tummy for ratings. And you know what? It’s working, because here I am writing about it like some kind of chump. But come on, world, did you see the same teaser I saw? How can I just ignore a man planning to “make me as appealing as possible, so the snake just says ‘well, I got this big thing here'”?

Look, I’m no “wildlife expert” (something the poor, confused people at Discovery can probably relate to), but we all know how to make one’s self appealing to anacondas. My only question is how Rosolie got those buns, hon.

As funny as it is to me that a television event with a name as overtly masculine as “Mega Week” will feature a man cramming himself headfirst inside a phallic symbol, the misconceptions Discovery continues to spread by airing wildlife programming with the same smorgasbord mentality but less discretion than the Food Network isn’t funny. Eaten Alive actually has more credibility than previous Discovery programming like the Megaladon mockumentary, but the show is still a shameless attempt at ratings that banks on people’s fear and ignorance.

Humanity has a sufficiently unhealthy relationship to the natural world already without an alleged science channel claiming everything is trying to swallow us all the time. Could anacondas eat a human alive? No doubt, no doubt. Are they likely to, and/or is it cool to force them to? Nope. Anacondas, like 100000000% of nature, make sufficiently fascinating subject manner without the “what are the odds that I will wind up in their tum-tums at some point” angle.