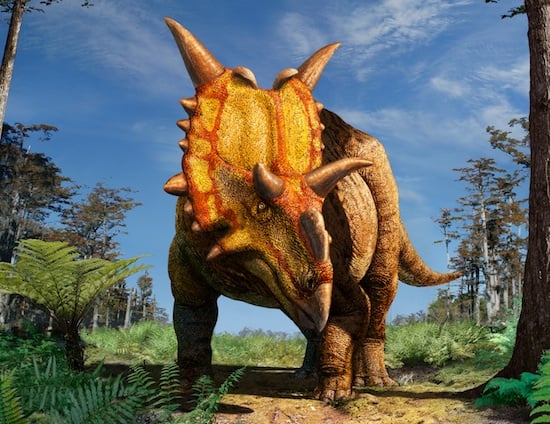 Everybody, meet Xenoceratops foremostensis, a brand new species of ceratopsid, or horned dinosaur, discovered in the plentiful fossil beds of Canada. Weighing in at 2 tons and about 20 feet long, Xenoceratops — meaning “alien-horned face” — lived about 80 million years ago, making it one of the oldest big-bodied horned dinosaurs known to paleontologists.

Xenoceratops name comes from its enormous and elaborate set of facial horns, suggesting to researchers that complicated sets of horns were developing very early on in the couse of horned dinosaurs’ evolution. xenoceratops boasted a mouth like a parrot’s beak, with a small ridge on top of it, unlike the nose horn of the more well known triceratops. It also had two larger horns over it’s eyes, as well as a frill at the back of its head. The frill is especially impressive, lined with smalle horns all around and crowned by a pair of enormous horns at its top.

Despite its intimidating appearance, xenoceratops was a reasonably gentle vegetarian, like the rest of its ceratopsid kin, using its horns for self-defense rather than hunting. As with modern animals like deer and elk, though, it’s a stretch to think the horns on these normally gentle giants didn’t come out when mating season rolled around.

(via Canadian Journal of Earth Sciences)