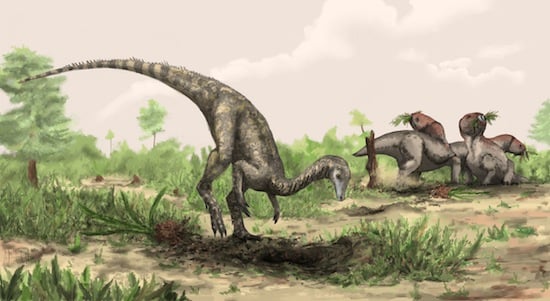 An international team of researchers have identified what they think is the earliest specimen of a dinosaur on record, a find that could rewrite textbooks and push back the development of dinosaurs between 10 and 15 million years from the Late to Middle Triassic period, suggesting that during their early development, dinosaurs wouldn’t have been the dominant vertebrate group on the planet. An unassuming specimen — which had been sitting on a shelf at the Natural History Museum in London since being discovered in the 1930s — Nyasasaurus parringtoni was a vegetarian, land-dwelling reptile about the size of a labrador retriever boasting a 5-foot-long tail, and likely originated in the southern portion of the super-continent Pangea.

If it turns out that Nyasasaurus parringtoni is not a dinosaur, its identification will still be a pretty major event in paleontology, marking the discovery of the closest relative to the dinosaurs. Early research on the fossils suggests that it was more closely related to birds than crocodilians, but it’s too early too say for sure at this point that Nyasasaurus parringtoni is definitely the oldest dinosaur on record.

Not that there’s not plenty of good evidence suggesting just that, such as the rate at which the bones and blood vessels of the creature took shape. According to co-author Sarah Werning at UC Berkeley:

Still, researchers are parsing their words carefully so as not to overstate. They do point out, however, that the find has implications whether Nyasasaurus is eventually recognized as a dinosaur or just a close relative, and lead author Sterling Nesbitt with the University of Washington:

It establishes that dinosaurs likely evolved earlier than previously expected and refutes the idea that dinosaur diversity burst onto the scene in the Late Triassic, a burst of diversification unseen in any other groups at that time.

The name of the early dinosaur — or close cousin, if it breaks that way — pays homage to the researchers who discovered and initially studied the bones. The late Alex Charig — credited posthumously as an author on the study — studied and identified the bones, but never formally published his research on the creature he dubbed Nyasasaurus. Parringtoni, meanwhile, commemorates Rex Parrington,  who collected the specimens for the Natural History Museum in Tanzania in the 1930s.