Cast magic missile at the darkness all you like, but only Jesus can save you now. 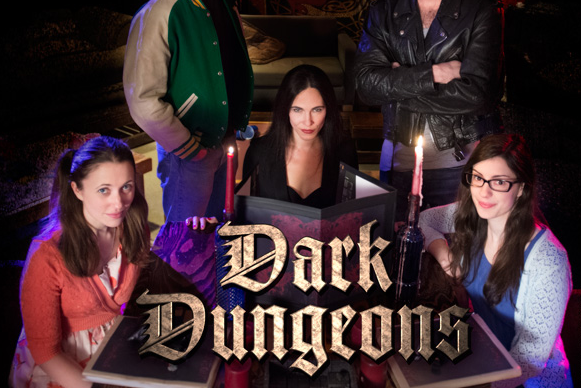 Everyone knows that Dungeons & Dragons is a secret tool of the devil to lure young, impressionable minds away from their rightful savior and forever trap their souls in unholy perdition, right? Well, in case you didn’t know, the upcoming Zombie Orpheus Entertainment-produced film Dark Dungeons is going to set you straight this summer.

Inspired by the 1984 comic book created by evangelist and notable crazy person Jack Chick, whose work includes such titles as “Are Roman Catholics Christians?” and “Satan Comes to Salem,” Dark Dungeons is the story of how playing tabletop roleplaying games turns you into a godless heathen.

The film follows Debbie and Marcie, a blond innocent ingenue and a clearly corruptible brunette who won’t make it to the third act, as they are “indoctrinated into this dangerous lifestyle where they face the threat of learning real life magical powers, being invited to join a witches’ coven, and resisting the lure of Ms. Frost, a vile temptress of a GM.”

First, watch the trailer. Trust me, you’ll be glad you did.

It should be noted that Zombie Orpheus Entertainment is also responsible for the tabletop heavy JourneyQuest, Dorkness Rising, and The Gamers: Hands of Fate. But this isn’t going to be a parody—they actually got the rights to the original Chick tract from Jack Chick himself and appear to be adapting his original vision as authentically as possible. Of course, that hasn’t stopped writer JR Ralls from specifically expressing excitement about their plan to “attack the darkness” on the project’s Kickstarter page. Well played, sir. Well played, indeed.

Regardless of the production company’s previous tabletop activities, they certainly seem to be doubling down on the evils of role-playing in most of their promotional material. At the bottom of the film’s website is a series of “frequently” answered questions about the role of satanism in tabletop role playing games. The whole thing is worth reading for its profoundly comedic content, but these were definitely our favorite responses of the bunch:

How people have committed suicide due to RPGs?

The American Association of Suicidology has concluded that RPGs don’t play a role in suicide, and the Association of Gifted-Creative Children of California did a survey of all psychological autopsies of adolescent suicides and could not find a single one that was linked to RPGs. However, that DOES NOT mean that it doesn’t happen.  For all we know, BIG-GAMING may just be very good at covering them up.

What evidence is there that RPG’s use real world spells?

William Schnoebelen has publically stated that, as a witch high priest (Alexandrian tradition) during the period 1973-84, he was approached by a roleplaying company to make sure their spells were accurate;  http://www.chick.com/articles/dnd.asp

In addition he warns us the “the Necronomicon and the Cthulhu mythos are quite real” which is why those dangers are exposed in Dark Dungeons the movie.

Ah, yes, the good ol’ American Association of Suicidology. Where would we be without their useful and important research?

The film will be released on August 14th, though we’re not yet sure where it will be available. Hopefully, the Dark Dungeons website will provide us with more details in the near future so we can make the appropriate preparations. After all, Jesus is going to want Mountain Dew when he gets here!