[Updated] Nathan Fillion and Alan Tudyk Raising Funds for New Series: “It’s the Quickest Way to See Us Back on a Spaceship”

Shut up and take my money! 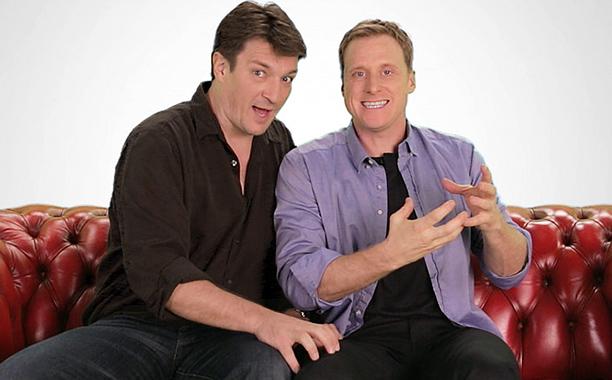 Firefly‘s Nathan Fillion and Alan Tudyk are collaborating on a web series about convention life and sci-fi stars, but that’s not relevant to your interests, right? No. Certainly not.

According to Entertainment Weekly, Fillion and Tudyk launched an Indiegogo page yesterday for Con Man, “a light-hearted take on the personalities, luminaries, and characters in the sci­-fi community we are privileged to call ourselves members.” Tudyk described the series as being

about the convention world. My character, Wray Nerely, was on a science fiction show called Spectrum, that was canceled too soon, and now he goes to conventions, to sign head shots, and meet fans, and do panels. Nathan’s character, Jack Moore, who was the captain of the spaceship on Spectrum, has gone on to incredible action-hero stardom, like Matt Damon. My character is frustrated with his situation and frustrated by Jack’s stardom. We follow Wray’s story as he goes to the conventions and does video game voiceovers and we are going to populate it with sci-fi actors and people that you will find at conventions. Zany hi-jinks ensue!

According to a press release, the series’ guest stars will include Sean Maher, Gina Torres, Amy Acker, Seth Green, Felicia Day, and James Gunn. (Hmmm, I wonder why Baldwin hasn’t been invited yet?)

Although Tudyk and Fillion are aiming to raise $425,000 for the show’s first three 10-minute episodes, Tudyk has reportedly already written ten scripts for the series. To find out more about what inspired the series and what Con Man may have in store for fans, check out Fillion and Tudyk’s (adorable) interview with EW and Indiegogo vid.

Wow. I believed it would happen, just not before lunch. Well done, you magnificent bastards. https://t.co/XuRXIAIJKI