Community Gets a Puppet Episode in Season 4 | The Mary Sue 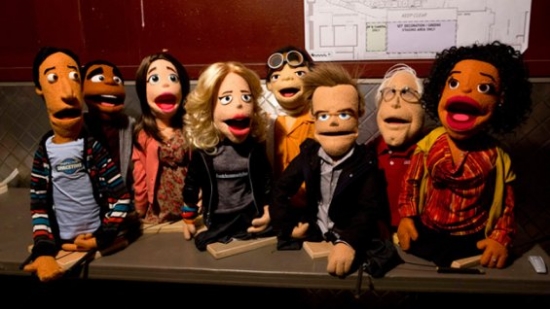 Yes. That is the cast of NBC’s Community in puppet form, and that is wonderful. An episode airing in April will have the gang from Greendale working out some issues with each other through the use of puppets. While the news that any other show on television right now was doing a puppet episode would probably be an obvious nightmare, considering how much I love Community, I’m really pretty pumped about this.

The news came out at a panel during PaleyFest 2013 last night. It doesn’t look like the episode will be 100% puppets, but probably closer to their video game episode which featured the cast as animated video game characters. To settle some conflict within the group, Dean Pelton (played by Jim Rash) suggests that they talk it out with puppets.

This is just a guess, but having puppets of the study group already made seems like something Dean Pelton would do. Seinfeld’s Jason Alexander also makes an appearance as a mountain man, presumably in puppet form as well.

After a bit of a slow comeback to the season after months of delays, and some less than stellar episodes (Halloween) it’s nice to have something to look forward to again. I love this show a bunch, and an episode with puppets seems like exactly the kind of thing Community does well.

The cast addressed the possibility of a fifth season of the show, saying that it’s not something anyone ever knows in advance. There was also a great fan question after Joel McHale talked about the Thanksgiving episode that will feature James Brolin as his character’s father. The fan asked that since Brolin also played Nathan Fillion’s character of Richard Castle’s father on Castle if that meant the two were brothers, to which McHale replied, “If there is a season five, we end up on Serenity.”

The rest of season four will also feature an origin story for the study group, and an episode written by Dean Pelton himself, Jim Rash, who besides his role on Community, also won an Oscar for writing The Descendants.

Overall, I’m pretty excited for the rest of the season. I love Community, and puppets. It stands to reason I’ll love Community puppets.

(via The Hollywood Reporter, image via NBC)