What We Learned From The Call of Duty: Ghosts Stream | The Mary Sue

What We Learned From The Call of Duty: Ghosts Live Stream 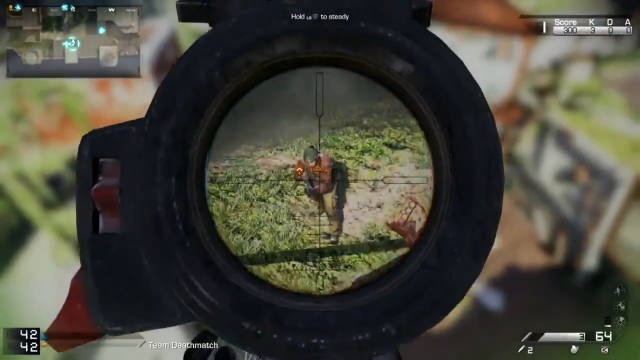 So, this afternoon Activision held their Call of Duty: Ghosts multiplayer reveal event and live streamed it for the world to see. On top of the vast customization options, seven new multiplayer modes were announced. And Eminem revealed a new single, Survivor, off his upcoming album with the trailer! Needless to say, people are excited.

“This is the biggest overhaul of multiplayer since the original Call of Duty: Modern Warfare,” said Mark Rubin, one of the producers at Infinity Ward. And from the sounds of things, he isn’t making that up.

The main focus of the showcase was the new customization options. There are over 20,000 combinations of physical appearance attributes you can make. And, for the first time in the series, you can pick your gender. While they didn’t focus on that much during the stream, that’s pretty significant for one of the biggest game series on the planet. But the character customization doesn’t end with your soldier.

One of the new multiplayer modes they showed off is called Squads. In this, you create a team of ten soldiers, personalizing their appearance, perks, loadouts, and style of play. They’ll join you on the battlefield against an opponent and their own squad, which is being advertised as a good mode for players of all skill levels. Your squad members can even earn XP and Prestige, which can be carried over into other modes.

There’s also Search and Rescue, a new take on the old Search and Destroy mode in which when a player’s offed, a dog tag will appear where they died. If a teammate picks up the tag, the player will be revived. If their opponent does, though, the player’s out for the rest of the round.

Definitely the coolest new mode is Cranked, which makes the action more intense than ever. Every time you kill an opponent, you become faster, but if you don’t make another kill in 30 seconds, you explode. That’s pretty hardcore. I also expect everyone to customize their character to look like Jason Statham for that mode, since we’re long overdue for a Crank video game.

Between smartphones and social media, the tech world has changed a lot since the original Modern Warfare, and so there’s the chance of all this becoming irrelevant. Infinity Ward has made some deliberate design choices to reflect that. They’re introducing a Call of Duty app, which adds dual-screen gameplay to the multiplayer by allowing you to quickly switch loadouts in between spawning, as well as playing an integral part in the Clan mode. Both the current-gen and next-gen versions of the game will be compatible with this app.

As is to be expected, it was also announced that a collector’s edition and a season pass for DLC will be available at launch. Activision’s also going to be pushing Ghosts in the eSports scene, including it in the 2014 MLG Pro Circuit. None of this really needed to be announced, but at least the people who want that stuff can be 100% sure they’ll get them.

Lastly, here’s the trailer showing off all the new content (and Survivor) if you missed it:

(via Call of Duty)