A package fit for a multi-billionaire. 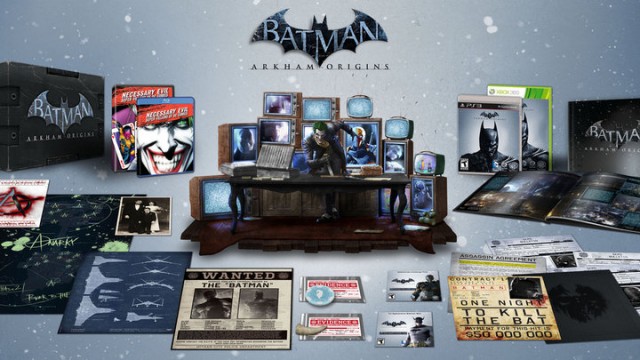 If you’ve got money to blow and want even more Batman paraphernalia for your collection, you can purchase the Batman: Arkham Origins collector’s edition for $119.99. While it’s double the price of the actual game, the amount of stuff you’ll be getting is just bonkers. Robin isn’t in the game, but I’m sure if he was he’d say “Holy swag, Batman!”

It definitely looks like you’ll be getting your money’s worth with this. The full collector’s edition includes a nine-inch Joker statue, an 80-page art book, two replicas of evidence taken from the Gotham City Police Department crime lab, a Batman wanted poster, a stencil of Anarky’s logo, a prototype schematic for the Batwing, a glow in the dark map of Gotham City, an intel dossier with profiles of all the assassins Batman faces in the game, a Wayne family photo, and a blu-ray documentary called Necessary Evil: Supervillains of DC Comics.

In addition, you’ll get a handful of DLC codes, including a playable Deathstroke and his challenge pack, a costume based on Batman’s original Detective Comics #27 look, and a pack of stages based on the classic Knightfall story– though that last one only comes with the PS3 edition. Oh wait, it also comes with a copy of the game Batman: Arkham Origins! I completely forgot.

Unfortunately for you Nintendo players, there’s no collector’s edition available for the Wii U version of the game. Or multiplayer, for that matter. But hey, at least you’re getting the normal game, right? Wii U players? Are you out there? Anybody? Bueller?