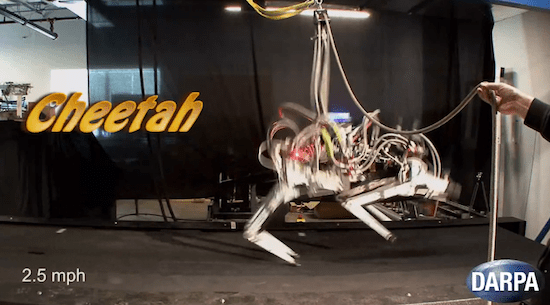 Careful readers will notice that the Defense Advanced Research Project Agency (DARPA) has a thing for robotic animals. While those were impressive in their own right, none of them were particularly quick off the mark — until now. Working with Boston Dynamics, the maker of BigDog, DARPA has produced a robot called Cheetah that can run at speeds up to 18 miles per hour, completely shattering the 1989 legged robot speed record of  13.1 miles per hour.

The cheetah robot is a product of DARPA’s Maximum Mobility and Manipulation (M3) program. In the wild, the cheetah-bot’s namesake can reach speeds up t0 75 miles per hour. While their robot equivalent isn’t there yet, researchers were able to mimic some of the cheetah’s tricks for reaching those speeds. Boston Dynamic’s Marc Raibert told the Washington Post:

“The biggest thing,” he replied, “was to get the coordination between the flexing of the back and the swinging of legs just right, so as to keep the system stable. Other adjustments were made on the separation between the legs to establish the gallop and the pace.”

Flexing the robot’s back is key to reaching these speeds, and is modeled on the motion of actual cheetahs. Though impressive, the current robot still needs a boom arm to keep it stable and gets its pneumatic power from an external pump. That said, DARPA does note that they are planning to do free running tests with the cheetah later this year.

It’s worth noting that despite these caveats, cheetah-bot has already met M3’s stated goals of, “tool design, improvement of production methods and processes, improvement in control of robot mobility and manipulation, and prototype demonstration.” Instead of being a finished product, cheetah-bot seems to be demonstrating technology to make all legged robots faster.

Who knows, maybe the next version of BigDog will have a little bit of cheetah in it.