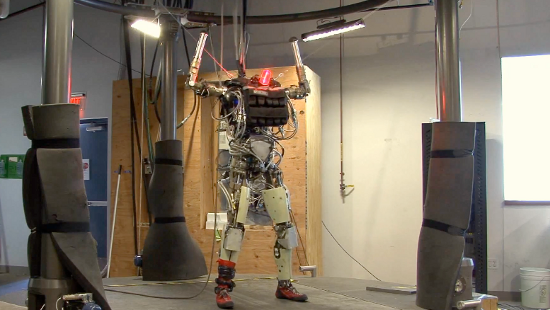 Though currently still in the prototype stage, this incredible biped can run 4.4 miles per hour, has a full range of motion that mimics the human body, and auto-corrects is balance, all within a frame similar to that of a human. But the final version of the robot will pack even more features, including a head, weight at a mere 180 pounds — analogous to a typical human male, and capable of mimicing perspiration and changes in skin temperature. Considering all that, the $26.3 million in seed money it took to get PETMAN on his feet seems like small potatoes.
According to Boston Dynamics, PETMAN will be used for “testing special clothing used by the US Army.” This would presumably include toxic environment gear, the idea being that PETMAN could wear the new kit into a dangerous situation and then be tested for dangerous exposure afterward. But let’s be honest, you don’t build a high-tech, multi-million dollar robot as a fashion model. A more telling explanation comes from IEEE Spectrum, who quotes Boston Dynamics’ VP of engineering Dr. Robert Playter as saying,

Now it’s really only a matter of time before PETMAN ‘s stiff, robotic arms are knocking at my door and delivering me flowers!