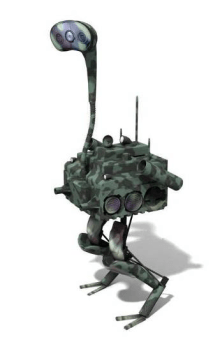 Ostriches are famous the world over for being fast runners, and also some of the most evil, foul-tempered creatures on the planet. That speed has got the people at MIT and the Florida Institute for Human and Machine Cognition interested as they work to develop FastRunner, a bipedal ostrichbot capable of moving incredibly fast over land. As far as the ill-tempered nature of the robot’s natural analog, that might perk some interest at DARPA, who are apparently fostering the bot’s development.

The challenge was laid down by DARPA, the military research organization that brought you the Internet and BigDog, to build a robot that can run at sustained speeds of 25mph. FastRunner, though still in development, is predicted easily match that goal thanks to an incredible leg design.

Once completed, FastRunner will stand at about four-foot seven-inches and weigh 66 pounds. The unique leg design is almost entirely mechanical, requiring only a single actuator to power each. Despite only having two legs, the engineers are also focusing on providing self-stabilization. Presumably, this would be similar to how BigDog takes a small step to the side to keep from falling. If the mockup is to be believed, in addition to its powerful legs, the robot will also use a shower massager as a head.

Why DARPA is pushing for a fast running robot may not be clear at first, especially with the money and effort the agency is currently pouring into BigDog and AlphaDog. However, as robust as those two robots are, they are not fast nor particularly agile. When discussing them, they’re generally given a pack mule role, carrying the heavy loads that weigh down the modern soldier.

A more mobile robot would have an entirely different niche to fill, perhaps similar to that of unmanned aerial drones. Fast, mobile drones could put more eyes on the ground, or potentially taking on more complex roles like communications or investigating dangerous areas.

The possibilites are endless, but FastRunner is still a ways away from completion. Once it takes to the road, however, it should make for quite an impressive — and possibly terrifying — sight.