Hang Out With CERN This Thursday, Talk About Particle Physics and Mice Versus Mammoths 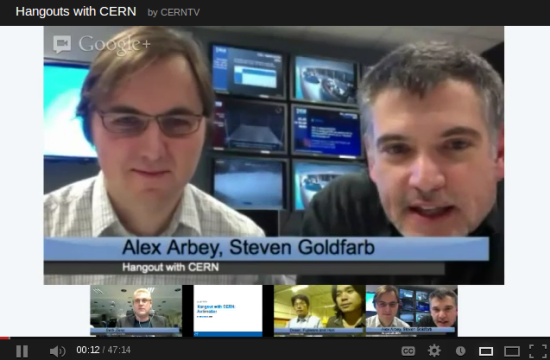 Sunday saw the first Large Hadron Collider physics beams of the year. Hooray! The scientists at CERN smashed together lead ions and protons in an attempt to study quark-gluon plasma, believed to be the primordial state of matter in the moments after the Big Bang. If that all sounds very complicated and you’d like someone to explain it you who really knows what they’re talking about, now’s your chance! Rather, Thursday is your chance. The folks at CERN will be hosting another Google Hangout to talk about the new beams, why they’re using lead ions, and who would win in a fight between a mouse and a mammoth.

The mouse and mammoth comparison is based on the size of the lead ions and the protons they’ve been smashed into. The lead ions are about 200 times the size of a proton, and CERN says smashing them together goes beyond the design specifications of the LHC. So why are they doing it? Probably because smashing ions and protons together is amazing, but if that answer doesn’t satisfy you, jump on Google+ or Twitter and ask them yourself.

The Hangout will kick off at 5:00pm Central European Time, which translates to 11:00am here in New York. CERN is taking questions through Google+ comments on the event page, and on Twitter using the hashtag #askCERN. You can watch CERN’s previous Hangouts on their CERNTV YouTube channel.