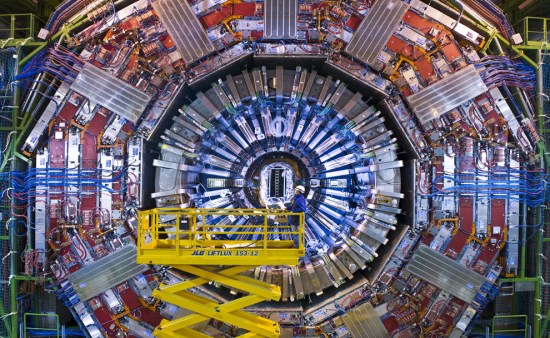 Remember CERN? Sure you do! They were the folks with the Large Hadron Collider who discovered that Higgs boson thing back in July. Well, they’re at it again with all their science and their 17-mile-long particle accelerator, and they’ve even broken a world record. CERN’s physicists have created the highest human-made temperature in history with their ALICE heavy ion collider, beating the previous record of four trillion Kelvin. ALICE produced a quark-gluon plasma, a sort of subatomic milkshake if you replace the milk with quarks, the ice cream with gluons, the blender with a large ion collider, and the cherry on top with ground-breaking scientific discovery. This is starting to sound less and less like a milkshake.

Haha! Get it? Like scoop of ice cream? No? Anyone? I’m so sorry.

Most of us know about the European Organization for Nuclear Research and their success in finding a “Higgs-like” particle with their Large Hadron Collider, but fewer people know about their other experiments at the LHC. CERN physicists conducted a total of six experiments using six different particle detectors. Of the six, the ATLAS and CMS experiments led to the discovery of the Higgs-like particle as announced on July 4 of this year. But we don’t care about those silly experiments right now; we’ve got bigger fish to fry in a five-and-a-half-trillion degree beer-batter!

All ordinary matter in today’s Universe is made up of atoms. Each atom contains a nucleus composed of protons and neutrons, surrounded by a cloud of electrons. Protons and neutrons are in turn made of quarks which are bound together by other particles called gluons. This incredibly strong bond means that isolated quarks have never been found.

Collisions in the LHC will generate temperatures more than 100,000 times hotter than the heart of the Sun. Physicists hope that under these conditions, the protons and neutrons will “melt”, freeing the quarks from their bonds with the gluons. This should create a state of matter called quark-gluon plasma, which probably existed just after the Big Bang when the Universe was still extremely hot.

The ALICE experiment is designed to study this hip, new state of matter as it expands and cools. The physicists at CERN hope to learn about the way quark-gluon plasmas formed the particles that make up every kind of matter in the universe. Future discoveries based on this research could help us better understand just how this big, crazy universe of ours came into being.

Some of the temperatures generated for the ALICE are estimated to be 38% hotter than those generated by another large ion collider, the Relativistic Heavy Ion Collider in New York, which capped out at a world-record temperature of roughly four trillion Kelvin (that’s 7.2e12 degrees Fahrenheit). Experiments conducted using the RHIC led to the discovery that quark-gluon plasmas behave like perfect, frictionless liquids. The quark-gluon plasma produced by the RHIC in 2005 is still expanding and cooling into other forms of matter, so it’s unlikely that we will hear much about the quark-gluon plasma from the LHC anytime soon.

(via Nature and CERN)