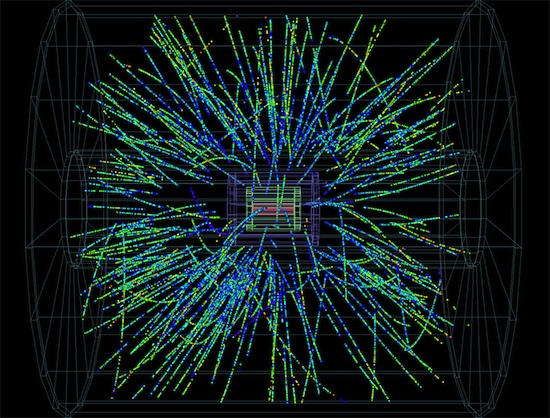 A contingent of MIT researchers working with the Large Hadron Collider (LHC) think they’ve found something no one has ever seen in the depths of the reams of data provided by the LHC’s particle smashups, and no, it’s not the Higgs boson, because jeez, you guys, there’s more to life than the Higgs boson, you know? Like whole new states of matter we’ve never seen before. By studying collision patterns in heavy metals, researchers think they may be seeing the first signs of a theorized state of matter known as color glass condensate, which could be the result of particles colliding at near-light speed  and entering a state of quantum entanglement, becoming inexplicably connected to one another.

It’s important to note that matter in the context of the LHC means something a little different than what we’re accustomed to thinking of as matter. Any matter that is created would be the result of collisions between individual protons and the nuclei of lead atoms, meaning that even if matter is being made, the amount produced is vanishingly small, detectable only as a stubborn correlation in the ways that some particles bounce off of one another. In this case, the small amount of matter would be a substance formed of superheated subatomic particles that researchers theorize would act much like glass — a solid while you’re looking at and interacting with it, but a liquid over very long spans of time.

Researchers are quick to point out that the data they have is very preliminary, but they are heartened by the fact that they’ve seen similar results to the data from 2 million lead particle collisions in tests of other metals, suggesting that they’re on the track of something more general than just an effect of lead. If that’s true, it could lead to a better understanding of how subatomic particles like quarks and gluons interact with protons on a daily basis, and under less extreme circumstances than are found in the LHC, and how they contribute to matter as we know it — and as we may come to know it in the future.