You're never going to guess who's in the suit! (Unless you're really into Norwegian winter sports.)

World chess champion Magnus Carlsen is currently challenging his entire home country of Norway, and one challenger was the guy on the right, who chose to wear a full, head-to-toe red bodysuit. The game came to a draw, but the real question here is, “Who’s the guy in red?” The answer is surprising (especially if you’re not Norwegian.)

The mysterious player drew against Carlsen, but it’s believed he used the Houdini chess engine. At least, that’s what I got from the Google-translated story on VGTV.no, a Norwegian news site. After the game, Magnus faced his challenger, a host of some kind, and a few chess commentators, and the mystery man was revealed as… 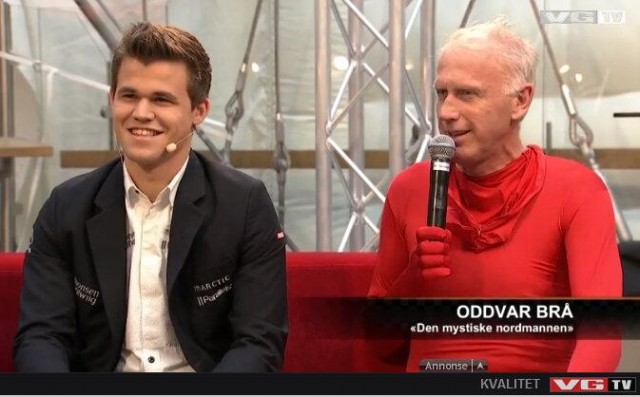 Alright, who guessed 16-time Norwegian National Championship cross country skier Oddvar Brå? You can watch the big reveal, and if you happen to speak Norwegian, you can listen to them talk about the game here: http://www.vgtv.no/embed/?id=81671&autoplay=false