Everyone bet on Carlsen, right? 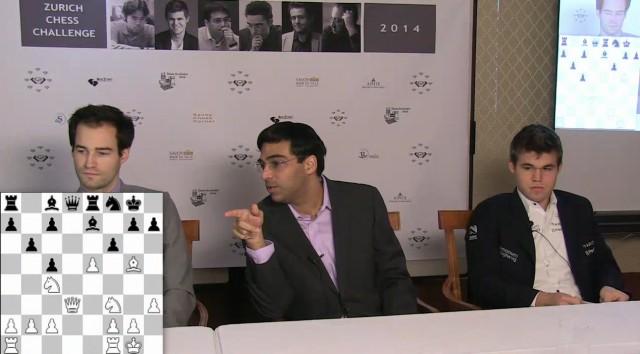 As if there were ever any doubt, World Champion Magnus Carlsen has won the Classical portion of the 2014 Zurich Chess Challenge. Today the competitors will square off for a series of rapid games, and of course you can watch it live right here.

The rapid games are starting a little earlier than the rest of the tournament has, and will kick off at 7:00AM ET. I can’t seem to find the exact rules for these rapid games on the Zurich website, but the main difference is that rapid games have much shorter time controls. Here’s how the official FIDE handbook describes them:

So expect the players to have between 15 and 60 minutes on the clock each. Also expect that to not phase Magnus Carlsen.

As for the classical games, yesterday Carlsen drew (disappointingly) against Viswanathan Anand in what was supposed to be an exciting rematch of the two World Championship competitors, but actually worked out to be a pretty dull game. Fabiano Caruana upset Levon Aronian in what turned out to be the actual most interesting match of the day, and Hikaru Nakamura drew against Boris Gelfand.

Enjoy the faster-paced rapid games today, and be sure to watch Carlsen accept his prize today at 1:00PM for the closing ceremonies.