This Chess Variant Gets Rid of Turns, Plays in Real Time, and Is Bananas

It's the perfect game if you love chess but hate waiting. 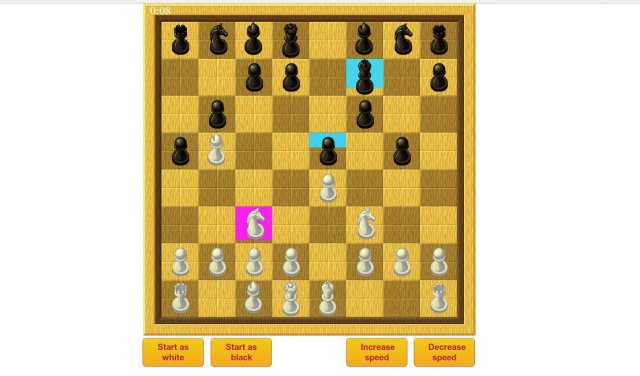 If you’ve been watching the FIDE World Chess Championship match between Vishy Anand and Magnus Carlsen, you know that chess isn’t necessarily fast-paced. Programmer Sven Robbestad decided to change that by creating a version that eliminates turns, and lets players make moves as fast as they can. It’s frenzied, hectic, and a lot of fun.

Real Time Chess is a completely bonkers way to play the game, but that’s what we love about it. Typically, the best way to pick up the pace in chess is to play blitz games where each player only has a few minutes on the clock for the whole game. Real Time Chess is a whole other level of fast, crazy play.

Standard chess rules apply in terms of how the pieces move, but you don’t have to wait for your opponent to make a move before making another one of your own. The only time restriction is on individual pieces. As you can see in the photo above, the knight on C3 has just moved and is highlighted. The highlight will fade up like a counter, and when the color is gone the piece is free to move again.

Besides the elimination of turns, the only rule we’ve noticed that’s different is that the king is permitted to move itself into check. We tried testing if the game allows en passant pawn moves, but the computer hasn’t presented the opportunity to make one.

We’ve been playing the HTML 5 version on Robestad’s site, but he told us that the game is now available for the iPad as well.

(via Svenardo and iTunes, image via Real Time Chess)