Why Are So Many Journalists Afraid to Call Trump Racist? 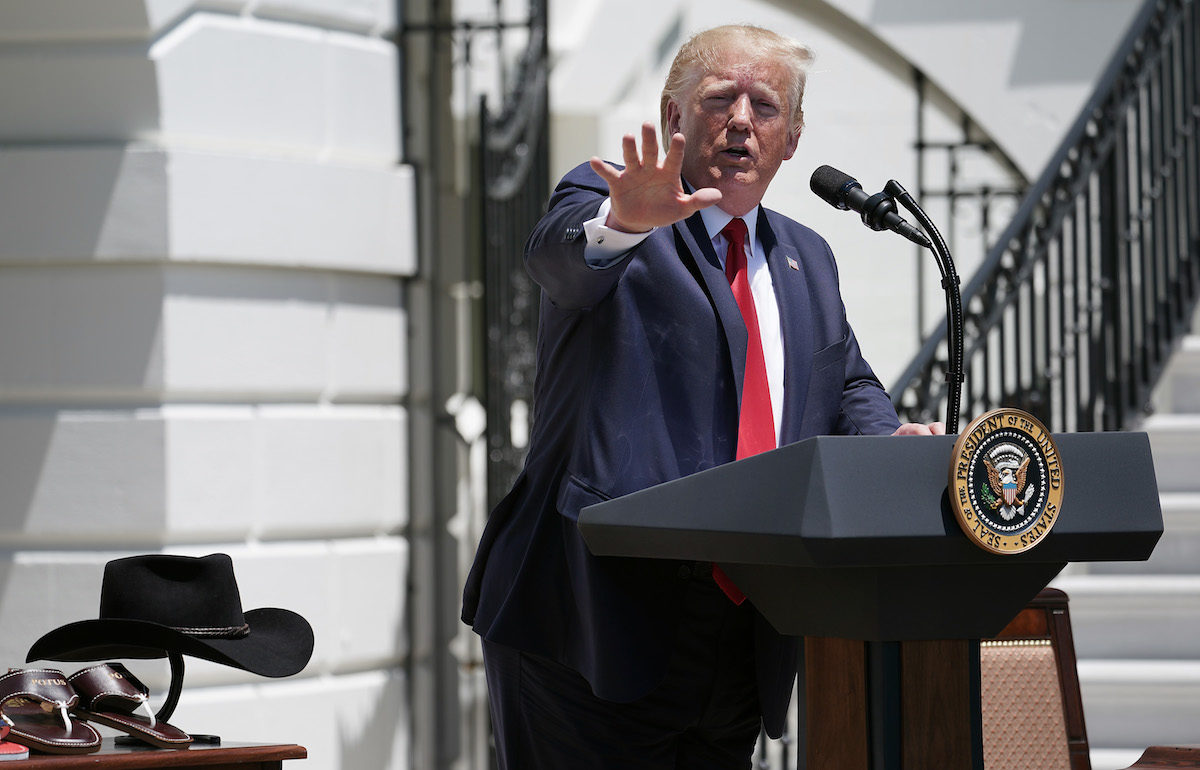 Trump has been saying and doing racist things since before he took office (here’s a partial list and here’s another) but most of the major media outlets have always had a problem actually declaring his words and actions to be racist. “Racially charged” is a favored term, as is “racial” and “racially insensitive.”

The Daily Show has created “Racist Euphemism Headline Generator,” and it’s pretty upsetting that their joke headlines (TRUMP ENTERS WARM BATH OF ETHNICALLY INSENSITIVE SLIP-UP is my personal favorite so far) aren’t that far from the reality.

Hey media, need to write a headline about Trump being racist, but don’t want to call him a racist? Try our Trump Racist Euphemism Headline Generator! https://t.co/xSSWFqKs99 pic.twitter.com/zqYgCceW1d

This week, Trump has been especially aggressive in his racist attacks on four Democratic Congresswomen of color, telling them to go back where they came from, despite the fact that three of them were born in the United States, and all of them are not only citizens but have sworn an oath to serve this country after being elected by voters who chose these women to represent them. He repeated that sentiment on Twitter and to reporters. And still many of those same reporters refuse to call his message what it is: racist AF.

Why are so many journalists so scared of that word? I get that there are some specific phrasings that might soften the reality of a situation but are nonetheless required. As much as we might like to condemn a person–say, theoretically, a sitting president with approximately two dozen accusations of sexual misconduct lodged against them–for being a sexual predator, for legality’s sake, we’re required to couch that conversation in terms like accused and allegedly until there’s a conviction.

The Washington Post tracks Trump’s “false and misleading claims” because despite the fact that they’ve found 10,796 of those statements so far, they don’t come right out and call them “lies” because that presumes intent and maybe he’s not always lying, maybe sometimes he’s just wrong. Or a moron. Allegedly.

But why the aversion to using the words racism or racist? Are they worried that, as Fox News’ Brit Hume needlessly pointed out, Trump’s words might not fit every existing definition of racism? Are they worried Trump will lash out in denial? Because he’s doing that anyway, so maybe we shouldn’t try to coddle him so much.

Our Country is Free, Beautiful and Very Successful. If you hate our Country, or if you are not happy here, you can leave!

Those Tweets were NOT Racist. I don’t have a Racist bone in my body! The so-called vote to be taken is a Democrat con game. Republicans should not show “weakness” and fall into their trap. This should be a vote on the filthy language, statements and lies told by the Democrat…..

Or is it possible that the mostly white male journalists reporting on these stories find themselves nervous around this particular word? Now, it’s not like white women or even journalists of color are incapable of writing a euphemistic headline (and some white male journalists are calling all of this by its name), but as Pajiba’s Kate Hudson shows us, it’s clear who’s leading this trend of fecklessness.

Out of morbid curiosity, I’m checking the race and sex of the reporters who refuse to write racist in regards to Trump’s racist attacks. You’ll *never* guess what I found out.

Spoiler: You will absolutely guess what she found. Just a sampling:

Perhaps these men don’t feel like they have the knowledge or authority to be the arbiters of what is and isn’t racist. However, by avoiding using the word, they’re making just as strong of a statement as if they’d addressed it directly. And maybe they just don’t think Trump’s words here actually are racist. In which case, they can go straight into the Brit Hume pile of Journalists Whose Opinions I Don’t Care About.