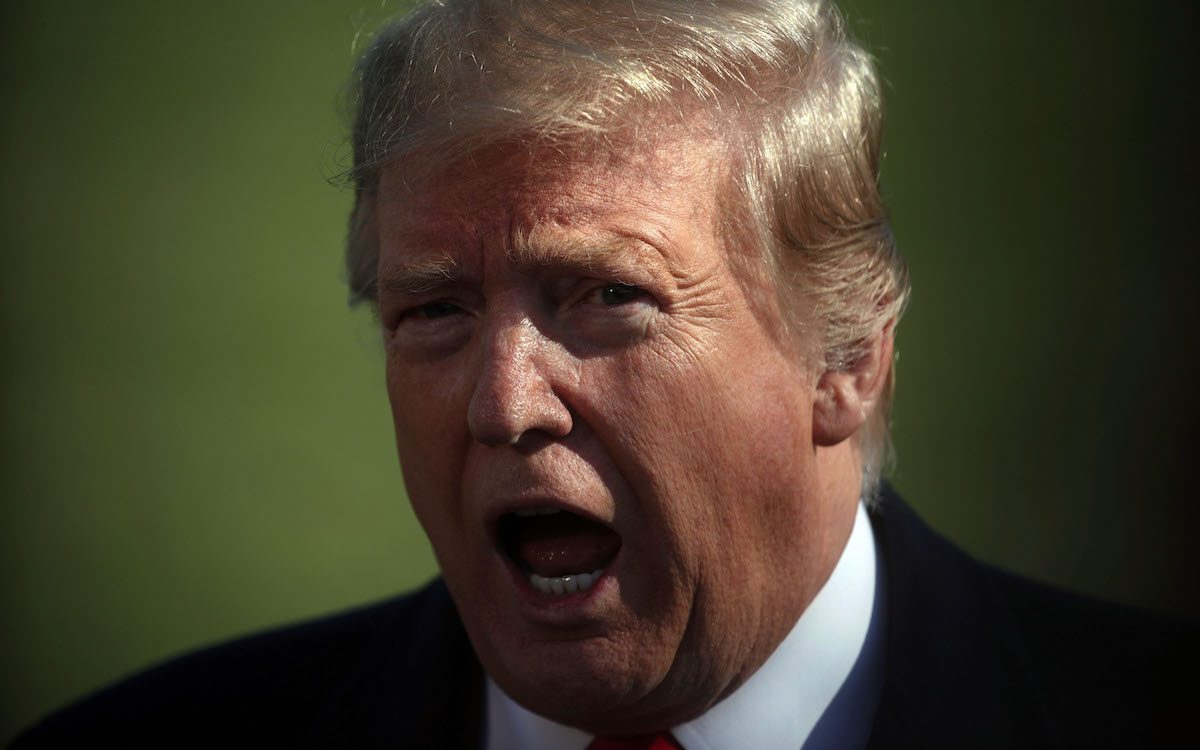 President Donald Trump has come under fire for a series of racist tweets aimed at the quartet of progressive Democratic congresswomen of color. The tweets, sent at 5:30AM this morning, show Trump telling these women (who are American citizens) to go back to their own countries.

So interesting to see “Progressive” Democrat Congresswomen, who originally came from countries whose governments are a complete and total catastrophe, the worst, most corrupt and inept anywhere in the world (if they even have a functioning government at all), now loudly……

….it is done. These places need your help badly, you can’t leave fast enough. I’m sure that Nancy Pelosi would be very happy to quickly work out free travel arrangements!

Though he doesn’t name them in the tweets, it’s clear that he’s referring to New York Rep. Alexandria Ocasio-Cortez, Michigan Rep. Rashida Tlaib, Minnesota Rep. Ilhan Omar, and Massachusetts Rep. Ayanna Pressley. All four freshman congresswomen are women of color and all four have repeatedly called out Trump’s administration for its hideous human rights violations at the border. Of the four, three of the congresswomen were born in America, while Rep. Omar fled Somalia as a child with her family to seek asylum. She attained US citizenship in 2000.

Trump’s racist, gross attacks should be no surprise: we’ve known the president was racist since before he entered the 2016 presidential race. We’ve seen through his actions, policies, and rhetoric, yet the media still ask the disingenuous question “is Trump racist?”. And this isn’t just conservative outlets.

In January, Anderson Cooper interviewed Ocasio-Cortez for 60 Minutes and asked her the same question. When she replied yes, he reponded “how can you say that?”. AOC replied, “When you look at the words that he uses, which are historic dog whistles of white supremacy. When you look at how he reacted to the Charlottesville incident, where neo-Nazis murdered a woman, versus how he manufactures crises like immigrants seeking legal refuge on our borders, it’s— it’s night and day.”

Cooper was promptly roasted on Twitter, because Trump’s racism isn’t a matter of debate. It’s clearly evident to anyone paying attention to his behavior. The congresswomen quickly shot back at Trump, calling him out on his hideous tweets.

Yo @realDonaldTrump, I am fighting corruption in OUR country. I do it every day when I hold your admin accountable as a U.S. Congresswoman. Detroit taught me how to fight for the communities you continue to degrade & attack. Keep talking, you’ll be out of the WH soon. #TickTock

P.S. @realdonaldtrump, keep talking, you just make me work harder. I'm proud of my Palestinian roots & a WEAK bully like you never wins. This is what America looks like ⬇️.

Mr. President, the country I “come from,” & the country we all swear to, is the United States.

But given how you’ve destroyed our border with inhumane camps, all at a benefit to you & the corps who profit off them, you are absolutely right about the corruption laid at your feet. https://t.co/HLKQCotR8T

You are angry because you can’t conceive of an America that includes us. You rely on a frightened America for your plunder.

You won’t accept a nation that sees healthcare as a right or education as a #1 priority, especially where we’re the ones fighting for it.

Yet here we are.

But you know what’s the rub of it all, Mr. President?

On top of not accepting an America that elected us, you cannot accept that we don’t fear you,either.

You can’t accept that we will call your bluff & offer a positive vision for this country. And that’s what makes you seethe.

THIS is what racism looks like. WE are what democracy looks like. And we’re not going anywhere. Except back to DC to fight for the families you marginalize and vilify everyday. pic.twitter.com/vYzoxCgN0X

You are stoking white nationalism bc you are angry that people like us are serving in Congress and fighting against your hate-filled agenda.

“America's answer to the intolerant man is diversity, the very diversity which our heritage of religious freedom has inspired.” -RFK

Several politicians took to Twitter to condemn the president’s racist tirade and lift up the congresswomen:

I reject @realDonaldTrump’s xenophobic comments meant to divide our nation. Rather than attack Members of Congress, he should work with us for humane immigration policy that reflects American values. Stop the raids – #FamiliesBelongTogether!

Let’s be clear about what this vile comment is: A racist and xenophobic attack on Democratic congresswomen. This *is* their country, regardless of whether or not Trump realizes it. They should be treated with respect. As president, I’ll make sure of it. https://t.co/WupieDquLA

Let's call the president’s racist attack exactly what it is: un-American. pic.twitter.com/fDeC5ka01F

The American people are sick and tired of a president who is a liar, a fraud, a narcissist and a bully, @realDonaldTrump. They want leadership which unites us, not divides us. https://t.co/ra1L8ZtR11

This tirade is not only further proof of Trump’s racism, but of his cowardice in the face of these women standing up to him. Women who have shown more conviction, passion, and commitment to this country than Trump and his ghoulish cabinet will ever be capable of. 2020 can’t come soon enough.