If You Can’t Wait for Borderlands 2, Play This Official Demake 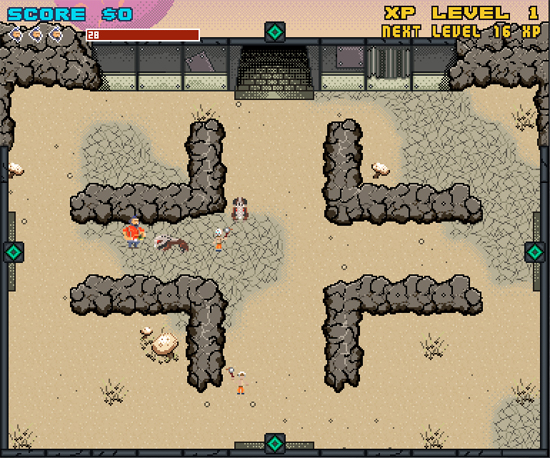 Tom Petty had it right; the waiting really is the hardest part. Borderlands 2, the sequel to the much beloved shooter, is set to hit shelves September 18th in North America and September 21st internationally. The developer, Gearbox Software, knows that folks are itching to play the newest offering and trek across Pandora one more time. In order to whet gamers’ appetites, they’ve released an official 16-bit demake of the game.

Amusingly, the demake is titled The Border Lands on the start screen. Players can pick one of the new characters that are available in Borderlands 2, but they’re represented in glorious sprite form. The entire point of the game seems to be to shoot enemies, level, and pick up loot. So, it’s definitely a Borderlands title.

Gameplay is fairly simple. Players use the arrow keys to move and space bar to fire. Depending on what weapons they use, the game is either ludicrously simplistic or insanely hard. For example, a railgun that fires both in front and behind of the player will annihilate most enemies without a problem. Even the bosses, indicated by the glowing red mark above their heads, go down quickly.

Our old buddy Claptrap is even there, sharing a quip about this version of the game:

Borderlands wasn’t always the slick, handsome bastard of a game it is today!

I can’t believe how young I look!

Ultimately, the game is an amusing distraction, and it looks like there will be other similar titles released between now and when Borderlands 2 drops. The homepage includes both Mount Jackmore and Gun Off as “coming soon.” For now, it’s time to destroy some 16-bit marauders.

(The Border Lands via Eurogamer)