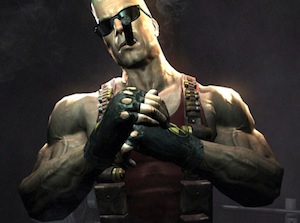 When developer Gearbox Software took it upon themselves to steal away one of the video game industry’s best jokes–the ludicrous twelve-year-long development period for Duke Nukem Forever–gamers everywhere were both astounded that the game would actually be coming out and sad to lose one of our industry’s most venerable jokes.

When Gearbox took over the development, gamers humorously wondered if their pre-orders from twelve years ago would be honored.

At a press event in London yesterday, Gearbox decided to be both simultaneously awesome for revealing they were talking to retailers to somehow find a way to honor the old pre-orders, and jerks for taking yet another Duke Nukem Forever joke away from us.

Randy Pitchford, Gearbox head honcho, informed VG247 that a lot of people pre-ordered the game once upon a time, and doesn’t want any negative feelings regarding old pre-orders that aren’t honored to reflect on Gearbox, so they’re in talks with games retailers to see what they can do about it.

I always wondered how long a pre-order would be honored. I pre-ordered Resident Evil: Outbreak over five years ago, then decided against purchasing the title, but since I only dropped five bucks on the pre-order, kept the pre-order ticket with the full intention of going back to that GameStop one day and seeing if I can pick up the game for free after the price drops to five dollars.

It’s nice to see that it may be entirely possible (assuming the game is still floating around out there), judging from Gearbox’s attempt, at least.