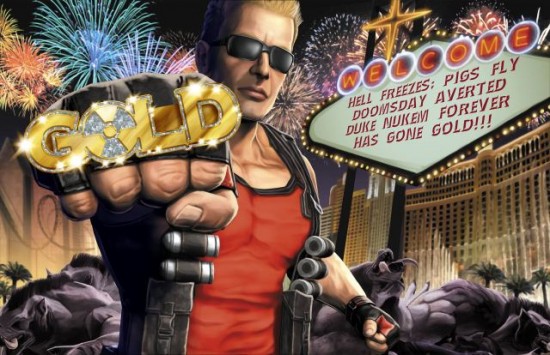 We knew it was happening. When Gearbox Software surprisingly relaunched the development of the fabled Duke Nukem Forever, we knew one day it would finally launch. And yet, here we are, presented with the news that the King’s return has gone gold and will be released to the public next month, and it still seems like a weird alternate reality, or at least regular reality where on launch day Gearbox declares, “Just kidding.”

“It’s just a game releasing,” you might say. “Duke is offensive and childish,” someone else who isn’t fond of the completely satirical take on extreme masculinity might offer. “It’s just a first-person shooter,” someone too young to remember the impact on gaming the original Duke Nukem 3D had. Duke Nukem Forever going gold matters for two reasons. The first reason being that the game has been the joke of the gaming industry for the past fourteen years. That’s 1997. This game has been in development since 1997. It has a development history Wikipedia page that is longer than its regular Wikipedia page. Fourteen years of development, and the game finally made it. It should be some kind of milestone if it weren’t so ridiculous. Secondly, back in the early days of gaming, when pixelated first-person shooters reigned supreme, Duke was one of the first games to offer gamers a coherent, fun, online gaming experience, as well as one of the first user-friendly level builders, which allowed users to pump out well-made custom maps with minimal effort. However one may feel about Duke, from a historical gaming standpoint, Duke matters, and after fourteen years of development hell, Duke Nukem Forever is no longer vaporware.

Now we just have to hope it’s good.