Before Watchmen: Minutemen #1 is Not a Complete Travesty | The Mary Sue

Before Watchmen: Minutemen #1 Is Not A Complete Travesty 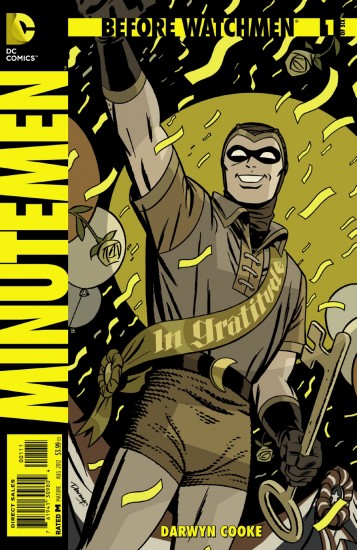 We’re surprised, right? After all, Before Watchmen has a lot to live up to. It’s a prequel (and we all know how prequels tend to suck) to the graphic novel that changed the way comics are created. It needed to live up to Watchmen. To make it worse, Alan Moore and Dave Gibbons are not even on the team. In fact, Alan Moore very vocally denounced its existence as a symptom of a ruthless money-grabbing comics industry. And he has a point. DC Comics was very underhanded in the way they dealt with Watchmen, cashing in on the success of the graphic novel to turn it into a franchise without permission from Alan Moore. Granted, they have the legal rights to all things Watchmen, but when the man who created it tells you not to let a movie ruin it, you listen to him.

DC didn’t listen, so now we have Before Watchmen, and people buying it despite Alan Moore saying “If people do want to go out and buy these Watchmen prequels, they would be doing me an enormous favor if they would just stop buying my other books.” I’m really sorry, but I had to know.

I was bothered by the titles they were giving to the issues. Watchmen had never been a superhero story – it was a story about superheroes. It was Watchmen. Before Watchmen looked like it was going to take them apart issue by issue. Sure, you have Minutemen #1, but then you have Silk Spectre #1, Comedian #1, Nite Owl #1, and you know the rest. The characters themselves are in the limelight, much like most superhero comics, and I’m pretty sure that goes against what Watchmen is all about. It feels like they’re just doing this to drag things out, but we shall see.

I suppose it’s too early to judge an entire series, but Minutemen #1 did manage to be decently harmless. It starts off epic, with dramatic cinematic panels and philosophical musings. Then it pans out and Hollis says “This is terrible.” 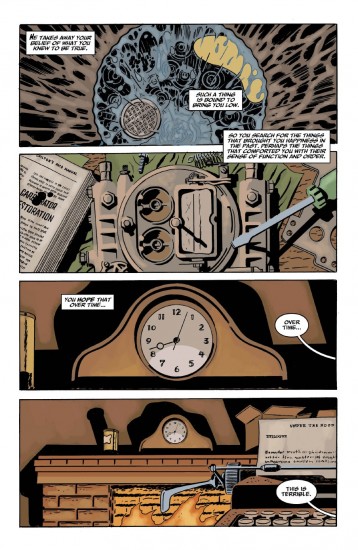 What’s terrible? What are you trying to say? Should I stop reading right now? Why does the cover say In Gratitude?

Reading Minutemen #1 is difficult if you feel strongly about the controversy. I sincerely wanted to hate it, but I actually ended up liking it. It’s like a Watchmen sidekick – you appreciate how it depends on the superhero and waits for its story to flesh out. For now, it’s stuck with introducing the characters, one by one, so it feels rather forced and fragmented.

That said, I actually really liked the backstory for Mothman, so I’m looking forward to see Cooke develop him toward his inevitable mental breakdown. I’m also really curious if Azzarello can manage to avoid mangling Rorschach’s story since we’ve seen quite a bit of his past in Watchmen. You can’t change the future, Before Watchmen! I’m watching you!

So much for boycotting Before Watchmen on Alan Moore’s account. I’m still not sure if I’ll like it, but it’s definitely entertaining.