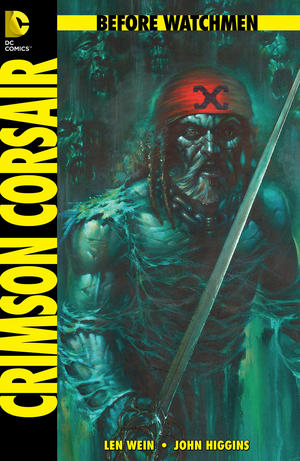 When you’re dealing with a hallowed franchise like Watchmen, you have to watch your step around the rabid fanbase. Or maybe, you don’t have to watch it at all, because no matter what you do, you’re going to piss some of them off. In either case, DC Entertainment has just officially confirmed a set of Before Watchmen prequel comic books; guess who’s pissed?

Part of Watchmen‘s original allure was its sparse but effective world building. Watchmen presented readers with a compelling, deep, alternate universe without falling into the trap of explaining every character’s backstory in a painfully formulaic fashion, while delving into an extensive history of the crime-fighting organization that provides the backbone of the story quite well even when it’s shrouded in mystery.

The Before Watchmen series aims to fix this by explaining every character’s backstory in a painfully formulaic fashion, while delving into an extensive history of “The Minutemen.” Before Watchmen is going to be a collection of 7 series, one devoted to each of the six main characters, with the 7th to the Minutemen at large. See: Painfully formulaic. The series are set to be issued once per week for 35 weeks starting this summer.

While Alan Moore has long since separated himself from any connection with DC Comics, partner Dave Gibbons seems fine with this prequel thing, going so far as to give a quote for the official DC press release. Personally, I’m not too thrilled with the news, but I’m willing to get behind it, because it might finally lead to the long awaited Saturday Morning Watchmen, and that’s what we all want, right? A Watchmen cartoon for kids? Yeah, of course it is.

This summer, DC Entertainment will publish all-new stories expanding on the acclaimed WATCHMEN universe. As highly anticipated as they are controversial, the seven inter-connected prequel mini-series will build on the foundation of the original WATCHMEN, the bestselling graphic novel of all time. BEFORE WATCHMEN will be the collective banner for all seven titles, from DC Comics.

“It’s our responsibility as publishers to find new ways to keep all of our characters relevant,” said DC Entertainment Co-Publishers Dan DiDio and Jim Lee. “After twenty five years, the Watchmen are classic characters whose time has come for new stories to be told. We sought out the best writers and artists in the industry to build on the complex mythology of the original.”

Each week, a new issue will be released, and will feature a two-page back-up story called CURSE OF THE CRIMSON CORSAIR, written by original series editor Len Wein and with art by original series colorist John Higgins. There will also be a single issue, BEFORE WATCHMEN: EPILOGUE, featuring the work of various writers and artists, and a CRIMSON CORSAIR story by Wein and Higgins.

“The original series of WATCHMEN is the complete story that Alan Moore and I wanted to tell. However, I appreciate DC’s reasons for this initiative and the wish of the artists and writers involved to pay tribute to our work. May these new additions have the success they desire,” said Dave Gibbons, WATCHMEN co-creator and original series artist.

“Comic books are perhaps the largest and longest running form of collaborative fiction,” said DiDio and Lee. “Collaborative storytelling is what keeps these fictional universes current and relevant.”