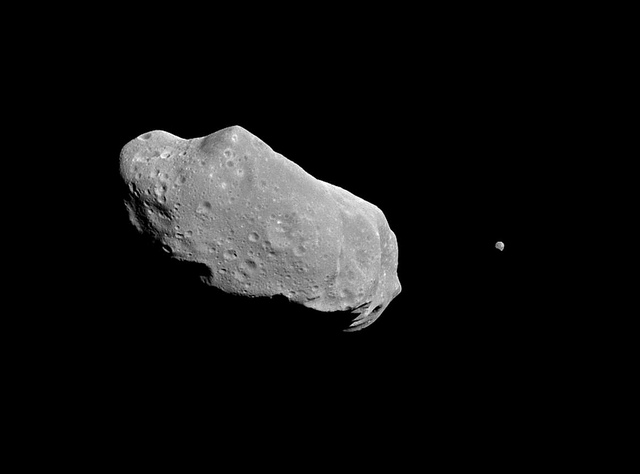 A “mountain-size” asteroid is passing by the Earth right now, and we’d all be able to see it if the snow weren’t ruining our lives.

Asteroid 2004 BL86 is about 550 meters wide and is passing by the Earth at about three times the distance to the Moon today. If you happen to live somewhere in America where you aren’t being slowly buried alive by flying ice, you should be able to easily see it with a telescope or maybe even binoculars, but it’s probably too bright for that. In the UK, though, it should be dark enough to make binoculars work from just after 4PM to about 4:52PM.

2004 BL86 isn’t terribly close to the planet—many asteroids have come much closer—but it will be the largest to pass by until 2027. In August of that year, 1999 AN10, a kilometer-wide rock, will pass by as close as 19,000 miles above the Earth’s surface. As close as that may be, it could still also pass farther away than the moon depending on how the orbital calculations shake out, and its chances of hitting the Earth are effectively zero. It should still make a pretty awesome sight depending on whether we’re still living in a frozen, white-skyed wasteland.

Meanwhile, scientists in locations clear of weather concerns are excited to study 2004 BL86 as it passes by. Lance Benner from NASA’s Jet Propulsion Laboratory told Discovery News, “For objects that get this close, that are this large, the radar observations are really analogous to a spacecraft flyby in terms of the caliber of the data that we can get.”

(via UsVsThem, image via NASA APPEL)