They're calling it Moby Dick now. I'm hoping they just don't know how that book ends. 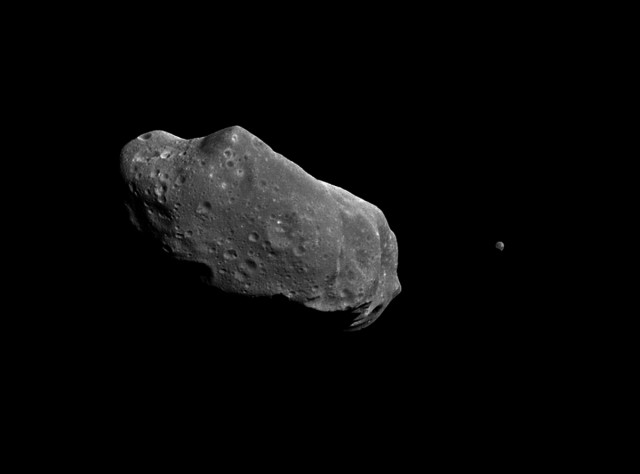 Don’t worry, you’re not going to get hit by asteroid 2000 EM26. Still, it’s a little unsettling that it was supposed to fly by last night, and no one has any idea where it is. The universe is a big place, and it’s far more likely to be found farther away from us than closer, but it’s a little disconcerting that we were so wrong about its trajectory.

Slooh Community Observatory held a talk about asteroid tracking and a live viewing as the massive asteroid was set to fly by the Earth at somewhere around 8.8 lunar distances yesterday, so it was probably pretty embarrassing when the asteroid didn’t show up to its own party. You can still watch the live coverage and asteroid discussion here:

Its magnitude should have been 15.4, which would have left it easily visible to telescopes, so it’s unlikely that we just missed it. More likely, unfortunately, is that we didn’t have enough information about the asteroid, which was only seen for a period of nine days 14 years ago, to accurately predict its trajectory. Luckily, 8.8 lunar distances isn’t that far in astronomical terms, but for an object that’s only about 300 yards across, it leaves plenty of room for error.

Of course, that doesn’t mean we can just let it go completely, and Slooh has called upon amateur astronomers to join the search and try to find it, which instills me with confidence. Generally, when you lose something, you should try to look in the last place you remember having it, but when that place is space, it’s a little less helpful.

In its own way, 2000 EM26 did a pretty bang up job of highlighting the need to continue and expand our observations of asteroids, so at least the point of Slooh’s coverage still hit home. The Slooh Observatory Director, Paul Cox, said:

Discovering these Near Earth Objects isn’t enough. As we’ve seen with 2000 EM26, all the effort that went into its discovery is worthless unless follow­up observations are made to accurately determine their orbits for the future.  And that’s exactly what Slooh members are doing, using the robotic telescopes at our world­-class observatory site to accurately measure the precise positions of these asteroids and comets.

(via Universe Today, image via NASA/JPL)