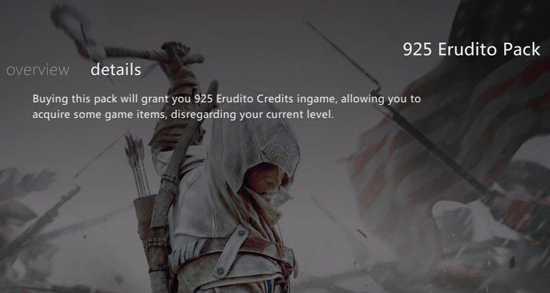 Video game publishers and developers are coming to believe that they’re not providing a product to their consumers. Instead, they’re providing a service. While this might at first seem like a good thing, it actually means that more companies than ever are embracing the idea of microtransactions. If they can offer tiny tidbits of content for a price, especially if these are just ways to make content already present in the game available faster, they will. Ubisoft is no different. Turns out that their latest game, Assassin’s Creed III, will apparently have packs of something called “Erudito Credits” available for purchase.

The packs are likely meant for the game’s multiplayer mode, even though Ubisoft has been quiet on the matter. Eurogamer explains:

The currency differs from the one used in Assassin’s Creed 3’s single-player campaign (that’s good old British pounds), which suggests the credits will be used in the game’s robust multiplayer mode – which now has its own disc.

If true, it would mean that these packs follow in the same tradition as the multiplayer microtransactions in games like Mass Effect 3 and Team Fortress 2. Everything can basically be earned with enough of a time investment, but players can put down some hard-earned cash to skip straight to the goodies.

Assassin’s Creed III releases tomorrow, October 30th, so it’s not like we’ll have to wait long to find out.

(via Eurogamer, image via Worthplaying)