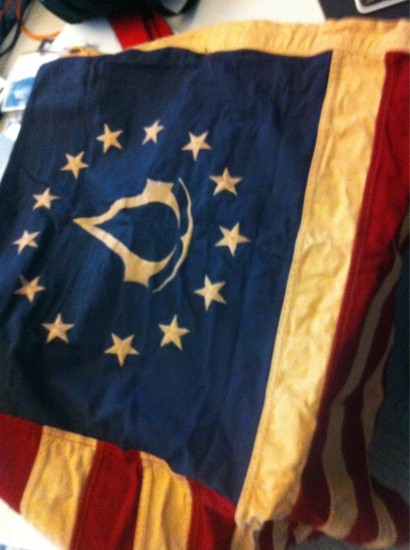 Tweeted out by Jeff Gerstman, the Assassin’s Creed-branded flag you see above is clearly intended to promote the upcoming Assassin’s Creed III, set during the American Revolution. If you’re at all aware of the Flag Code, it might strike you as slightly lacking in class. If you know more about the Flag Code, this might strike you as a violation of Federal law. And if you have the whole thing memorized, you know it probably doesn’t actually matter, but it’s still against code.

The Flag Code, for any of you who are woefully unaware, is a piece of federal law that dictates the appropriate use — and more importantly the myriad inappropriate uses — of the American flag. Federal law might sound like a big deal, but before you get too excited, it’s worth noting that the Supreme Court has ruled that punitive enforcement of the Flag Code would be unconstitutional considering the First Amendment. In short, it’s a federal law you are totally free to break. It should have been pretty clear from the start, but it’s not like anyone is going to get arrested.

That said, the flag, by virtue of being used for an advertising purpose, is in violation of the United States Flag Code Section 8. On top of that, adding any kind of insignia to the flag is also a violation of the code. Let’s just hope this bad boy’s length is 1.9 times its height or we’re going to have a huge catastrophe on our hands, right? Right?! Of course not, because no one ever obeys the Flag Code anyway, except all these school districts that apparently kick kids out of school for wearing flag-branded clothes. And those aren’t even actual flags, so I think they’re technically okay.

Sure, the whole thing is technically illegal, but at most it just seems a little distasteful. Even then, it’s worth remembering that Ubisoft is a French company and the team working on Assassin’s Creed III is Canadian. Beyond that, when was the last time you thought about flag code, especially concerning a foriegn flag? Still, they might want to call off this particular campaign to be safe. More than anything, though, this is all an excuse to look into the weird, literally and legally unenforceable annals of the United States Flag Code and have fun with the term “federal law.” If a tree falls in the forest, breaks a federal law on its way down, and no one’s around to hear it, does it make a constitutionally enforceable sound?