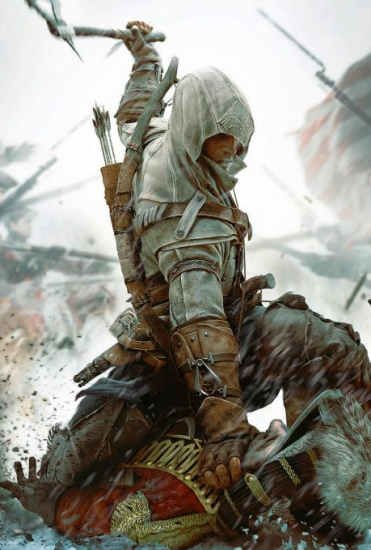 It’s kind of ironic, really, that Assassin’s Creed 3‘s setting seems exciting and new despite the fact that the American Revolution is the oldest story we Americans[1] have in common. The American Revolution was effectively the genesis of our culture, the fight by which we came to be what we are today. Considering the glut of World War II video games that tread and retread the United State’s comparatively less nationalistic, late-to-the-party combat overseas, you’d think that we would have at least touched on the iconic fight for independence and freedom that took place right here on our very own soil, right? When you really dig into it, it’s not all that surprising that we haven’t, but still interesting to consider why.

First and foremost, you have mechanical concerns. I’m sure you remember this from school, or if nothing else from The Patriot, but at the time of the American Revolution, standard military procedure (for the British, at least) was constructed around the use of fairly inaccurate, low-range, slowly reloading weapons, and a history having particularly showy battles in wide open fields. Basically, there was a lot of standing in line and shooting at the other dudes standing in line. You can probably imagine why Call of Duty: American Revolution doesn’t exist. It was a style of warfare that didn’t die particularly easy either. It wasn’t really until the Civil War that we finally got it out of our system.

That being said, the American Revolution was also a fantastic showcase for the burgeoning tactics of guerilla warfare. Now that sounds more interesting, right? Of course it does, but we still have a bit of a complication on our hands. What’s that? Muskets really suck. While muskets were a widely used armament at the time, they weren’t particularly good weapons (from a modern standpoint, especially a modern gaming standpoint). First of all, they were muzzle loading, meaning that the reload process, in addition to being slow, was also complicated. It wasn’t just something that took a long time, it also took concentration. Imagine wielding a musket in an FPS and not only having to stop for nearly a minute to reload after every shot, but also remaining utterly defenseless while playing a reload minigame. On top of that, the lack of rifling in a musket contributed to its general inaccuracy and lack of range. While that inaccuracy could be worked in as a game mechanic, anyone who’s played an RPG-based shooter where accuracy is determined by dice rolls can tell you that painstakingly lining up a shot, pressing the die button, and then having your target not die can be incredibly frustrating because it feels like an artificial handicap. 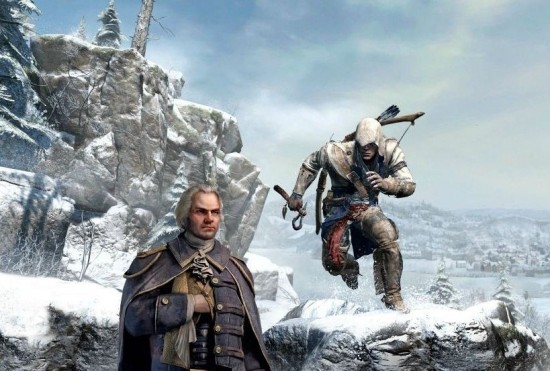 Now, admittedly, both of these issues are largely predicated on the idea that nowadays, most AAA titles are shooters or at least involve some shooting. Just because the American Revolution is bad as an FPS doesn’t mean that it can’t make a good RTS or even RPG, but the difficultly in incorporating some good real-time combat (shooting being the most widely popular variety) was and is still a stumbling block for gaming in the 1770s. Of course, Assassin’s Creed has the handy ability to conveniently sidestep the matter by being a third-person character-action stealth game, one that sort of shies away from shooting. If there was going to be a franchise that could deal with slow-firing weapons and make up for it with face-hatcheting, it’s Assassin’s Creed, and that’s exactly what the American Revolution setting is asking for.

Mechanical concerns aside, there’s still one other little detail that makes the American Revolution a little bit of a tricky era in history. Sure there was a Big Bad to kill with reckless abandon, but that big bad was the British, and the British, as I am sure you are aware, are still around and generally friendly. In fact, they’re kind of our buddies now. Needless to say, the whole thing could be a little awkward if handled poorly.

For comparison, lets go back to the old World War II thing. In World War II games, you’re slaughtering Nazis. Good! Kill those Nazis! Nazis are evil! It’s worth noting that you aren’t killing Germans so much as you are killing Nazis. Germans are still around. Nazis (for the most part) are not. It’s not easy to offend anyone with your hatred of Nazis, except maybe the Germans, but that’s not because they have any affection for the guys, but rather because addressing Nazism at all is a bit of a German taboo. 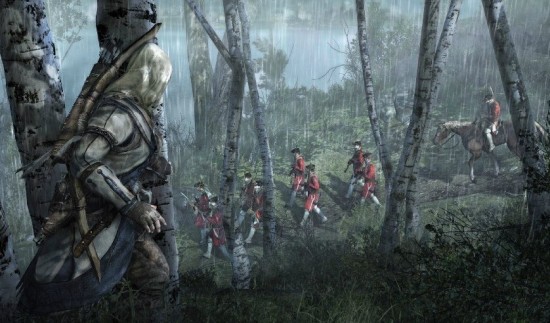 All that being said, in the American Revolution, you’re slaughtering Redcoats, the British. Granted, the Imperial British aren’t quite the same fellows we know and love today, but the distinction is considerably less black and white than the distinction between Germans and Nazis. The fact that you can’t say “Well, the ‘British’ don’t exist anymore, so we can do whatever we want with them as an archetype” makes the whole conflict a little bit more complicated from a story standpoint. The American Revolution probably isn’t quite as fitting for a gung-ho kind of kill ’em all story as World War II is. Which isn’t to say that “gung-ho, kill’em all” is an accurate way to represent any conflict, just that it’s even less applicable here than elsewhere. It’s also worth noting that Assassin’s Creed 3 comes from Ubisoft Montreal, and the Canadian relationship with British Imperialism is even fresher than the American one. That being said, I doubt the game devs are holding any active grudges.

Again, the Assassin’s Creed franchise is particularly well equipped to deal with this kind of weird grey area, and in more ways than one. First of all, they have that whole “Assassins vs. Templar” thing to fall back on, so they can effectively retcon anyone and everyone into morally distinct categories of good and bad that way. Secondly and more interestingly, the Assassin’s Creed games have a history of at least touching on political stuggles and power dynamics. I mean, In Assassin’s Creed: Brotherhood, you were pals with Machiavelli and discussed the relative merits and flaws of Machiavellian measures.

With that kind precedent being set in the earlier games, Assassin’s Creed 3 has the potential and ability to approach the complicated aspects of the American Revolution without whipping out a big ol’ moral paintbrush, or at least only whipping out the big ol’ moral paintbrush for use in Assassin vs. Templar relations. It looks like they’re buying into this potential as well, the decision to make the protagonist of Native American descent layers on a whole different and unique set of motivations, desires, and tomahawks. Assassin’s Creed 3 looks ready and willing to play with the shades of grey a little. Hopefully you won’t just wind up being everyone’s one Native American friend.

All told, the American Revolution definitely has a lot of potential as a setting for a video game, it’s just that the potential the American Revolution has is a distinctly different flavor of potential than the other historical events that Western game developers tend to harp on. From both a gameplay standpoint and a story standpoint, the American Revolution presents some challenges that don’t necessarily have solutions that you can pull straight out of the video game tropes playbook. That being the case, hopefully they can do the era justice and keep the ball rolling on this “period piece video games that are actually good” trend we’ve seen developing with releases like L. A. Noire and Red Dead Redemption. And more than anything, let’s hope that Assassin’s Creed 3 can really open up the world of video games to more face-tomahawking, because really, how could we possibly have too much of that?

1. For the purposes of brevity, I’m going to be referring to “United States Citizens” as “Americans.” Canadians, I know you’re technically Americans too. And all the rest of y’all down south, for that matter. We just don’t have a good, exclusive demonym for “USers.” That one is pretty gross, right?