Arrow’s Black Canary, “They’re Not Trying to Make Her Weak,” Plus Another DC Hero Cast For Flash 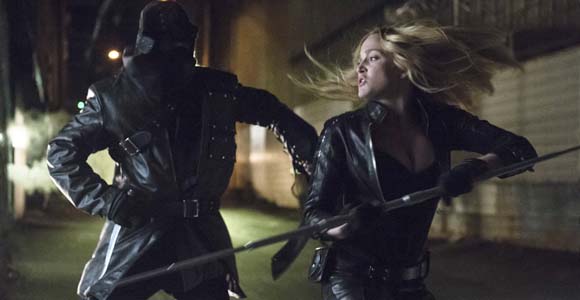 If you haven’t been watching The CW’s Arrow, you’ve been missing out on some exciting superheroine action. Their Black Canary, Caity Lotz, seems pretty excited about how her character has been portrayed so far. Read on for what she had to say in a recent interview, plus another bit of casting news for The Flash spinoff!

On tonight’s new episode, comic character Nyssa al Ghul will be making her first appearance and we’ve also recently had word they’ll be airing an episode titled “Birds of Prey” next month. Executive producer Marc Guggenheim added to The Hollywood Reporter, “We gave ourselves room to grow and evolve. Birds of Prey is very much the same thing. You’re not going to end up with the Holy Trinity of Oracle, Black Canary, and Huntress right out of the gate. We’ll get there.”

As expected, we’re thrilled about all of this.

Lotz recently spoke with Comic Book Resources about Black Canary and her equal footing with Arrow. “I love it, and I love that I get the opportunity to play such an awesome character, and someone who’s so strong — and that they like writing her that way, and they’re not trying to make her weak; make her into a damsel in distress,” she told them. “They’re really letting the character be strong. It’s a lot of fun, and it’s exciting to be a part of that, and hopefully there will be more of that.”

They also touched on the strength of the character, both in flashbacks and the current storyline.

Sometimes I find it hard when I’m playing Sara on the island, because I still kind of have present-day Sara lingering in my head a little bit. I want to give her that strength. I feel bad for Sara on the island, because she doesn’t have that strength yet. As the character is making decisions, and the reactions, she’s insecure, and she’s scared. I think that’s hard, because sometimes I just want her to be badass already — be like, “Nope, sorry! Screw you guys, this is what’s happening.”

Sometimes it can get hard when you’re playing a strong character. You want to protect that strength of the character, and sometimes that can make you want to be unemotional, or not open. I think that’s a trap that you have to really be conscious not to fall into. Knowing that your character still has its strength, even when you give it that humanity, and the emotion, and the weakness. You have to feel it, but then you have to hide it. If you just have it too much out, then you do kind of lose that strength. But if you don’t have it at all, then you don’t feel for the character. It’s got to be there, but you’ve got to be fighting with that emotion.

I love that she gets it.

Meanwhile, just after we posted news of the Iris West casting for The Flash yesterday, it was officially announced Broadway star Carlos Valdes would be taking on the earlier rumored role of Cisco Ramon (aka superhero Vibe). The Wrap writes, “Cisco is described as a mechanical engineering genius and the youngest member of the team of scientists at S.T.A.R. Labs.”