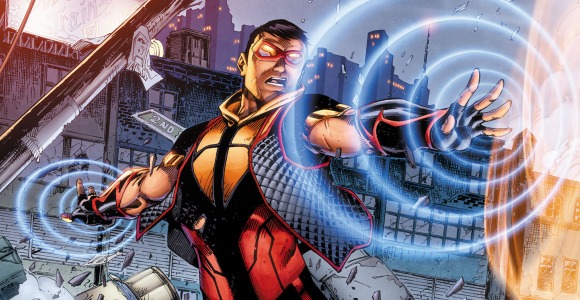 Regardless of what you think about the DC movie universe, there’s no denying their TV game is on point. Quickly cementing their status as one of the smartest and most diverse franchises on the small screen, rumors are now flying that Arrow‘s CW spin-off, The Flash, is looking to add the shockwave-shooting, Hispanic-American hero Vibe to their pilot.

According to Moviehole, Barry Allen (played by Grant Gustin) won’t be the only super-dude in The Flash; he’s going to be joined by fellow Justice League member Cisco Ramon, a talented mechanical engineer and metahuman. After being caught in the event-horizon of an inter-dimensional portal, Ramon’s DNA was re-written, granting him the ability to shoot out powerful shockwaves. Though we’ve already (ostensibly) seen Barry’s transformation into The Flash in Arrow, when a lightning strike sent him flying into a wall of chemicals, it’s not yet known whether or not we’ll see Ramon’s origin story.

Ramon would join the already-diverse Arrow universe, which includes Katrina Law as Nyssa al Ghul, and David Ramsey as John Diggle.  We’ve also already heard about the race-bending casting notice put out for an African-American Iris West, who would serve as Barry’s love interest in The Flash (and, you know, would hopefully be a little more than that, too).

With all this awesomeness, Arrow star Stephen Amell thinks that the DC movie and TV universes should operate in harmony, like their Marvel counterparts. Said Amell on the Quiver Podcast, ”

“Of course…I would like them to have a shared universe…We are trying to put them on a level where if Warner Brothers and DC Comics decided they wanted to them to be a part of the movie, people would buy it … I think that the characters we are creating in our universe can stand next to Henry Cavill and Ben Affleck and Gal Gadot.”

Well I know we’d all love to see Amell’s abs on the big screen, too. The Flash begins filming in Vancouver this March.