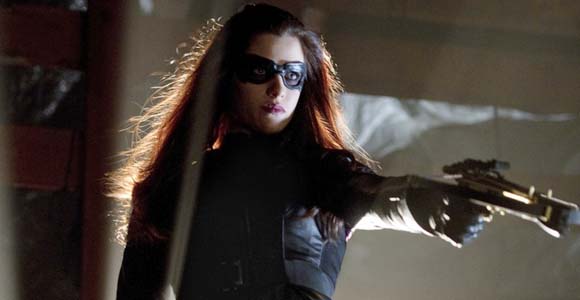 It’s exciting to see characters from DC Comics making their way into The CW’s Arrow. And specifically for us, it’s exciting to see female characters brought to life. In Season 1 of Arrow, Helena Bertinelli, aka The Huntress was played by Jessica de Gouw. The depiction was a pretty good one, barring Oliver playing a large role in her origin, so I was bummed when the actress picked up a starring role on NBC’s Dracula, meaning she’d probably be too busy to return to the superhero series. I’m happy to say I was wrong!

According to TV Guide, de Gouw will reprise her role on March 26 in an episode titled “Birds of Prey.”

Apparently Helena is coming back to Starling City to try and kill her dad. Again. And Arrow is going to try and stop her. Again. But this time he’ll have help from Black Canary (Caity Lotz)!! Executive producer Marc Guggenheim told TV Guide this will be an episode “everyone will be talking about after.”

I will not lay odds on us seeing Barbara Gordon anytime soon, if ever, on the show but it will be plenty cool to see the Birds of Prey start forming regardless. Meanwhile, another superhero in the making is getting ready for his training montage. Colton Haynes, who plays Roy on the show, talked to Comic Book Resources about the next episode.

“This training episode is awesome,” he said. “I have some great scenes with Oliver, and I also have some pretty heated scenes. It’s not all happiness that Roy gets to become something. He has these annoying training scenes where he feels like he’s too good for it — like slapping water.”

And what about his “costume?”

“I’ve never owned a hoodie, but now it’s become a thing. My nephews are wearing red hoodies, and people send me pictures on Twitter of their watch parties where they’re wearing red hoodies. It’s become a pivotal part of the character,” he told them. “If I do eventually — some day soon, hopefully — get to don a costume, I hope a red hoodie is part of it. But it’s been fun because now they’ve cracked jokes about it a few times on the show, and they’ll continue to do that — people calling Roy “Abercrombie” and all that. It’s a key part of the character now.”