The insanity of Saints Row is spilling over into the real world. 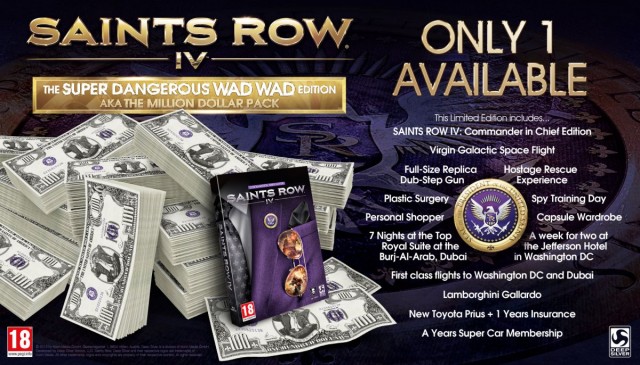 In “The Super Dangerous Wad Wad Edition” besides the game itself, the lucky buyer — and it’s limited to only one buyer — gets cars, a flight in space, first class flights around the world, and more. So much more. Here’s the full rundown of what you get when you spend one million dollars on a video game:

Plastic Surgery (we assume it’s for you, and not the personal shopper)

One week for two at the Jefferson hotel in Washington, DC

First-class air travel to both Dubai and DC

One day of spy training

A Prius, because you probably won’t want to drive the Lamborghini everywhere

If you have one million dollars and you want to spend it all on a whole bunch of crazy stuff at once, you can try to order the Saints Row IV: Super Dangerous Wad Wad Edition via email by contacting [email protected]