Hundreds of Birds Die In Beebe Arkansas | The Mary Sue

200 Blackbirds Die in Arkansas Town on New Year’s Eve, Down From 5,000 Last Year 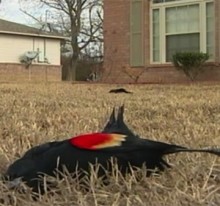 Last year, nearly 5,000 dead red-winged blackbirds rained down on the Arkansas town of Beebe. As careful readers will recall, 2011 was marked with a number of disturbing mass animal deaths, and the Beebe bird massacre fit nicely in with these apparent harbingers of the apocalypse. And now, it’s happening again, in the same place. Is humanity not getting the message?

Actually, the authorities say that the 2011 Beebe bird die-off was likely caused by fireworks that so startled the roosting fowl that they flew wildly — colliding with objects they would normally avoid. The blackbirds, it seems, lack strong night vision and generally roost through until morning.

With last years bizarre bird tragedy fresh in their minds, wildlife control officials had taken pains to try and keep fireworks away from the sleeping birds. However, it seems that didn’t deter some ne’er-do-wells from setting off fireworks near trees where the blackbirds were snoozing. At about 7 PM, some 50 birds were found dead. By the end of the night, about 200.

What’s particularly unfortunate about his year’s bird die off is that wildlife control officials believe it was deliberate. Ginny Porter, a spokeswoman for the Arkansas Game and Fish Commission is quoted by CNN as saying:

“Someone went into the roost and set off fireworks. We didn’t catch them, we don’t know who.”

Guys, can we please not be jerks to animals? Great, thanks.