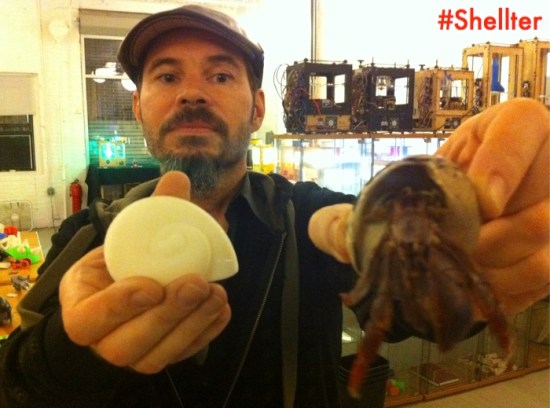 Here’s another ecological crisis you probably weren’t aware of: Hermit crabs, which normally live the discarded shells of other sea creatures, are facing a massive shell shortage. That’s why Makerbot, the creators of consumer grade 3D printers, have launched a crowd-sourced endeavor to house these crustaceans called Project Shellter.

The aim of the project, which is headed by Makerbot’s artist in residence Miles Lightwood, is to create shells using the company’s 3D printers that hermit crabs can use to live in. Without shells, the soft exoskeletons of the crabs make them an easy target for predators. Furthermore, a lack of natural shells has forced hermit crabs to use garbage such as shotgun shells and bottles as makeshift homes.

It’s an ambitious project which will have to overcome issues of biodegradabilty, safety for the crabs (non-toxic shells, please), and what kind of shells crabs will prefer. If you’ve got a 3D printer, or are a keen designer, head over to Makerbot’s Thingiverse and create some shells of your own!

(Sharable via Slashdot, images via Makerbot)