Pigeons Have an Understanding of Numbers on Par With Primates 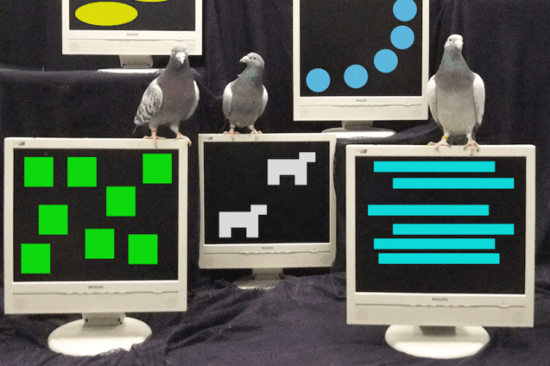 When you think of “intelligent animals,” pigeons are probably not the first thing that comes to mind. After all, they’re just birds, how intelligent could they possibly be, right? Well, it looks like we, at least I, may not have been giving them the respect they deserve when I imagine how easy it would be to just kick one while walking down the street. No, it seems that pigeons can develop a grasp of the abstract concept of “numbers” just as well as many primates. It may not relate to their everyday lives, but they can still figure it out, which is pretty impressive.

So, how does this all work? It dates back to a study done with rhesus monkeys in the heady days of 1998. The tested monkeys were shown a bunch of images in sets of two or three. Each set was made up of images that displayed a number between one and three, not like an Arabic numeral, but like an image of 1 thing, or 2 things, or 3 things. The monkeys were then trained to be able to pick out the image with the largest quantity of things. After they got good at that, the real magic started. The researchers then started showing the monkeys sets of images with larger numbers. Sometimes they were all numbers the monkey’s hadn’t trained with, sometimes one or two was familiar. In all cases, the monkeys were still able to pick out the image with the largest quantity, even if it was 8 or 9, instead of 2 or 3, like they’d trained with. They didn’t do it perfectly all the time, but they beat random chance by a ton.

What this proved was that the monkeys weren’t just engaging in some mundane memorization exercise; they were actually learning the abstract concept of numbers and were able to apply the rules they’d learned to scenarios they had never experience before. That takes some brain power. Pigeons, apparently, have that kind of brain power as well, because when the experiment was repeated with pigeons, the little guys passed with flying [editor’s note: Hilarious] colors.

Now, it’s not quite that simple, because the pigeons had a little trouble when dealing with numbers they’d never seen before. In cases where either had to deal with a pairing of numbers, neither of which they’d seen before, their success rate dropped to around 75%. In cases where they had to compare a new number to a number they’d seen before, they scored a much better rate of around 90%. To be fair though, the monkey’s had a similar handicap.

The question now is: Where did this ability come from? It may have come from a similar ancestor, but considering how far apart birds and primates are on the evolutionary tree, this seems kind of unlikely. Then again, I’m no scientographist, so I might just be over simplifying. The other possibility is that something in both the lives of pigeons and the lives of monkeys lead them to develop an ability to identify numbers in the wild. What that could be is anybody’s guess. The next step, obviously, is to try and figure this out, but also to try and see what other animals might have this hidden ability. Snails? Frogs? Fish? Insects? Unicorns? Who knows, but we better start testing; maybe the whole world has been counting behind our backs this whole time.