Archie Comics Is Out of Hoots To Give, Announces Archie Meets Predator For Spring 2015 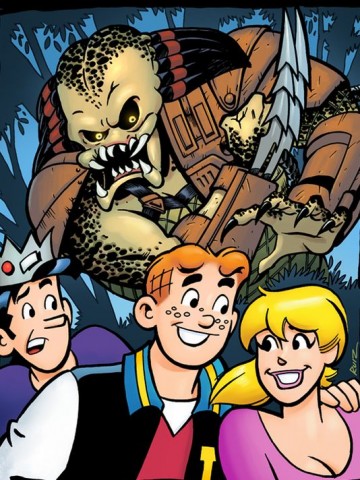 Ohhh, Archie Comics. I love what you’ve done with yourself lately. When they’re not being refreshingly progressive, featuring awesome cameos, or publishing variant covers guaranteed to make comics nerds’ hearts sing, they’re slapping their famously wholesome characters in the middle of a zombie apocalypse or making Sabrina the Teenage Witch genuinely chilling. In that context, their announcement with Dark Horse Comics that they’re doing a four-issue Archie Meets Predator series seems completely normal.

“puts Archie and the gang in the alien hunter’s sights while they’re on spring break in Costa Rica.

The beach vacation comes unexpectedly after Jughead wins a prize from a lucky bag of chips, and Betty and Veronica make the most of the sunny weather by competing in a ‘best-dressed’ contest.”

Only then Betty and Veronica have a fight, the former runs off into the woods, and BAM! Predator.

Writer Alex de Campi says she was drawn to the Archie/Predator combo “because it’s just completely insane. Let’s take this gentle, beloved, classic teen cast and hunt them down and slaughter them one by one. Seriously, if you wouldn’t jump at the chance to write something like this, you need your head examined.”

The entire interview is worth reading and should really make you excited about the new comic. But I’m gonna pull this bit out:

‘I’ll be putting in little easter eggs from the film throughout the story—still working out a situation in which it would be feasible for an Archie character to say, ‘I’m a goddamn sexual tyrannosaur,’ though. Sounds like possibly a Reggie line.”

Did I ever think I’d type the phrase “I’m a goddamn sexual sexual tyrannosaur” in a post about Archie? No, I did not. Archie Comics, you are a goddamn treasure.

(via The Hollywood Reporter, top pic courtesy of Dark Horse/Archie)