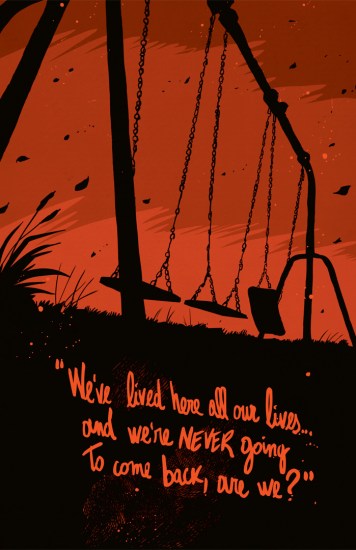 The fifth issue of Afterlife With Archie comes out tomorrow, just in time for us to ask some questions of the folks who make the book a reality. If you haven’t heard, AWA is an ongoing series about a zombie apocalypse in Riverdale, yes, Archie’s Riverdale, and it doesn’t shy away from fully embodying the horror genre. Here’s our interview with writer Roberto Aguirre-Sacasa and artist Francesco Francavilla.

The Mary Sue: Roberto, did you pitch Afterlife With Archie at Archie Comics, or were you approached by them originally? What was the pitch like?

Roberto Aguirre-Sacasa: It wasn’t a formal pitch. It came out of a conversation I had with Jon Goldwater and his son Jesse. I was raving about Francesco’s variant zombie cover for Life with Archie #23, saying how I wished that there’d been zombies in the actual book, and we all kind of had a lightbulb moment: “Let’s do this as a comic book!” A few hours later, Jon e-mailed me and wrote: “We’re doing this, let’s go!” And then, basically, I just started writing.

TMS: Afterlife With Archie is a very different kind of Archie comic, especially for those who are familiar with the publisher. Has it had the kind of success you’d hoped for?

RAS: Wildly exceeded my expectations, both in the way the book has been received, and in how creatively satisfying it’s been. So far, we’ve had a blessed run. As always, it’s about keeping that going for as long as possible—and for as long as people are excited to read the book.

Francesco Francavilla: I was totally floored and surprised by the huge reaction/success the book has gotten from readers and fans. I mean, I knew we had a really great, solid story, but I was a little worried we wouldn’t be taken seriously just because it was so different from anything Archie has published before. But yes, I’m VERY HAPPY to see everyone embracing the book.

TMS: What has the reader response been like? Any different than your past work?

RAS: By far, Afterlife has generated a greater response than anything else I’ve worked on. I think people enjoyed the work I did at Marvel, in particular my run on Marvel Knights 4, but Afterlife has prompted — and continues to prompt — an incredibly passionate response from fans. Most of it overwhelmingly positive, which is gratifying. The best thing is when you hear, “I’ve never read an Archie comic book until this one, but I love this one!” Personally, I love that people still call Afterlife an “Archie” comic book—that’s so important.

TMS: One could say the very fact that Afterlife With Archie exists is pretty unreal, but what do you feel is the most shocking moment you’ve written or drawn into the series?

RAS: You know, I have to start by saying that everyone at Archie has been so supportive of the story Francesco and I have wanted to tell. A couple of times, when I sent the script in, I thought, “They’re not gonna go for this,” but they always have. In terms of what we’ve published, I think Archie killing his zombified father is shocking and upsetting. I think the Cheryl and Jason subplot is ultra-creepy, but necessary because it shows that Afterlife with Archie isn’t just a zombie book, but a horror book, exploring different kinds of tropes within the horror genre. In terms of shocking moments that have been written but haven’t yet been published, I can say with confidence that issue #6, which tells the story of what’s been going on with Sabrina since issue #1, is the most horrific/upsetting thing I’ve ever written. And I didn’t write it to be shocking for the sake of being shocking, it just…sort of…happened. And again, I feared the worst when I sent the script in, but again, everyone was like, “That’s so dark, but we love it.”

FF: Issue #4 had the moments that were the hardest so far for me to draw: the dog fight and Vegas’ sacrifice, and of course Archie beating his dad to death. I can’t remember the last time I was so emotionally invested while drawing a book. Issue #6 will have quite a few scenes too – wait until you read it.

TMS: Roberto, you have the incredible task of bringing Riverdale to life in the screenplay for what’ll hopefully become an Archie film. Is that a lot of pressure, or just another day at work? How are you approaching the script differently?

RAS: I can’t say too much about this right now — only that some big announcements are coming very soon — but it is NOT just another day at work. I see it as INCREDIBLY high stakes-y. The single most important thing I’ll write for Archie, for sure.

TMS: Roberto, you’ve said Kevin Keller and Cheryl Blossom will feature prominently in the movie, is there anything more you can tell us about their roles, or the film itself?

RAS: Again, more news coming soon, but yes, Cheryl and Kevin will both find their way on to the screen in important, key ways. They won’t just be window-dressing. They will be movers and shakers, even more so than they are in the comic books, I hope. And by the way, they’re among my favorite characters, so… definitely expect big things from Ms. Blossom and Mr. Keller.

TMS: Francesco, your Eisner nominated Black Beetle character began as a simple doodle and then a short webcomic, and is now an ongoing series at Dark Horse Comics. Just so we can say we had it first: are there any other ideas you have around that you think could go that distance?

FF: A few more for sure: one of the ideas that I would like to develop asap is U.S.R.A., a story set during WWII that involves giant robots. It has been simmering for a while in my ideas drawer but I think it’s about time to put it out there and hopefully readers will enjoy it as much as The Black Beetle.

TMS: Francesco, your work is very obviously influenced by a love of pulp imagery and comics. Can you describe your favorite thing about the genre, or simply in what aspect of it you find the most appeal?

FF: I think — like with anything from that period — those comics/books had personality, character. Many things today seem to be done with a cookie cutter: cars, clothes, you name it. Back then everything had a more developed design sense which made each thing unique and original. I am trying to apply that to comics, in a way.

TMS: Issue #5 is the close of your first story arc, with all the main characters holed up in Lodge Manor. How much longer can the gang hold out in the face of zombie apocalypse? I mean, can you tell us if there are plans for more Afterlife With Archie? After all, zombies do have a tendency to come back and bite us.

RAS: This is only our first arc; there are many more stories to tell in the Afterlife universe. And not just zombie stories. Issue #6, like I said, is the purest horror story we’ve told, and it barely has any zombies in it. The series has been plotted through issue #16, and the universe keeps expanding—so yes, there’s a lot more life (and death) in Afterlife to come. (This is a good time to remind everyone: Afterlife is an ongoing comic book, with no end in sight.)

FF: Oh, there is MUCH MORE awaiting right after that last page of #5. ;)

If you’ve made it to the end of this interview without being bitten, perhaps these three pages from issue #5 will chase down your interest.