Review: The Chilling Adventures of Sabrina, #1

This ain't your grandma's teenage witch. 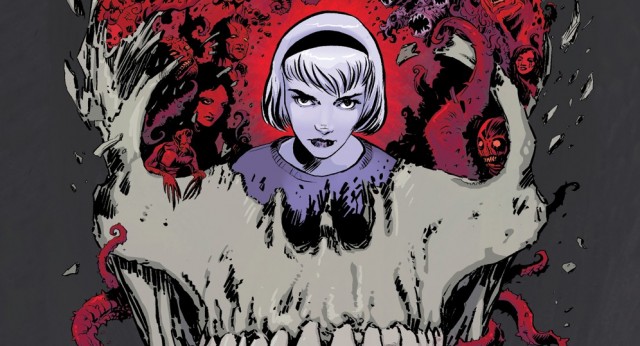 While most of us didn’t grow up with the original Archie spin-off Sabrina the Teenage Witch comic, just about everyone of this generation has seen the Melissa Joan Hart television series from the ’90s and knows the set-up well enough: on her sixteenth birthday, Sabrina discovers her latent magical powers as a half-witch and must go live with her aunts for two years to protect her mortal mother while her father is absent on business in the “Other Realm.” It’s generally a fun, lighthearted approach to the witchy Halloween aesthetic, more “spoopy” than actually spooky.  But true to its title, The Chilling Adventures of Sabrina goes in a much different direction than its kitschy predecessors and isn’t afraid to get downright macabre in some places. To borrow a phrase from another famous comic adaptation, it doesn’t just adopt the dark: it was born in it.

The first issue, which was written by Roberto Aguirre-Sacasa and hits shelves on Wednesday, sets up the story at an intense pace that dispenses with almost everything you might know about Sabrina in one fell swoop, save for one key tidbit: witches are not permitted to fall in love with mortals. That doesn’t bode well for Sabrina’s human mother, of course, who’s drained of her sanity to protect her lover Edward Spellman’s secret. Just in case you were worried about the implications of a powerful man taking advantage of a vulnerable woman, Spellman too is summarily dispensed with (and in the creepiest way possible, I might add) so that their child only has her aunts to take care of her—and her terrifying telekinetic powers, which she is not allowed to use in the house, thank you very much. Eventually the aunts move Sabrina to a new coven nestled in the mortal town of Greendale (start your Community crossover fanfiction now, ladies and Human Beings™), so that they can homeschool her in witchcraft while she attends public school “for everything else”—an interesting spin on the idea of witch schooling in light of other, ahem, popular explorations of the idea. From there Sabrina, as well as her Liverpool-bred cousin Ambrose and her cat Salem, begin to explore their new town and all the new attractions it has to offer.

This is a much darker world than we’ve ever seen from Sabrina before; Hilda, Zelda, and Edward Spellman all engage in some pretty dastardly behavior, and even Sabrina herself doesn’t shirk away from the morally grey once she has some agency of her own (neither do the characters borrowed from Archie, either, in a rather brilliant cameo that involves two witches trying to settle a “blood-rivalry”). The comic purports that to be a witch is to live outside of the acceptable bonds of human behavior, far away from the responsible feel-good life lessons that most teenage stories inhabit, where there’s no point in wanting someone to like you for who you are when you can make them like you with a love potion. In fact, Sabrina says as much when Salem challenges her on the subject: “This is who I am—” she tells him. “A teen witch. This is what we do.”

Of course, more than anything else the issue owes its ominous and foreboding tone to Robert Hack’s gorgeously macabre artwork: everything is sepia toned and full of heavy light-and-dark contrasts, save for occasional pops of color in Sabrina’s wardrobe and hair that are slowly diluted as she gets older (well, there’s also quite a bit of blood at the end of the issue, but that’s a whole other thing). Oddly enough, the ’60s period setting also adds an extra sense of doom and gloom to the tale. You get the sense that something terribly inevitable is about to happen at any moment, but that it’s so deeply rooted in the past that it might as well have already happened, and there isn’t anything you can do except turn the page and hope for the best.

All in all, this is a refreshing change of pace for a story we all think we know already, and one that’s perfectly timed for Halloween. Given the potential abundance of powerful, complicated female characters in a story like Sabrina’s, I’ll be interested to see where Aguirre-Sacasa takes this title as it continues. And as a bonus, every month’s Chilling Adventures title will also include a reprint from the original 1962 Sabrina the Teenage Witch, just to throw the somber mood of the new title into sharper relief for you. Let me tell you, it’s very weird to jump between demonic succubi raised from the depths of Gehenna and “Did you know a witch invented the Twist? Neato!” But somehow, the juxtaposition makes both versions of the story all the more compelling.

Speaking of which, Archie Comics was kind enough to send us some images of the artwork for this issue, as well as the first five pages of the story. Check them out below: