Every Gesture Used to Beat Angry Birds Visualized on Paper 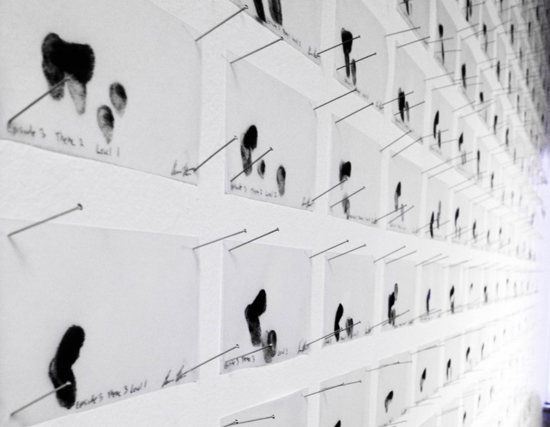 Of all the games that have come and gone on smartphones, Angry Birds continues to be the front-runner for the platform’s most successful franchise. That’s painfully obvious, considering there’s even a Star Wars version out there. In general, casual gaming has never been as hot as it is right now, and artist Evan Roth knows it. As a way of commenting on the new ways in which we interact with our slew of gadgets, Roth’s created an art installation that visualizes the gestures used to beat every level of Angry Birds out of ink and paper.

Titled Angry Birds All Levels, Roth’s work is currently being featured at the Science Gallery in Dublin, Ireland. Here’s a snippet from their description of the installation:

Consisting of 300 sheets of tracing paper and black ink, it’s a visualisation of every finger swipe needed to complete the popular mobile game of the same name. The gestures exist on a sheet of paper that’s the same size as the iPhone on which it was originally created. Angry Birds is part of a larger series that Roth has been working on over the last year called Multi-Touch Paintings. These compositions are created by performing simple routine tasks on multi-touch handheld computing devices [ranging from unlocking the device to checking Twitter] with inked fingers.

In essence, Roth’s more or less fingerpainting while playing Angry Birds. That definitely sounds like art. Check out the video below for a quick look of Angry Birds All Levels, and try to resist the urge to play.